Shane King, a third-year student in Mercy Secondary School recently won the prestigious “Young reporters for the Environment Litter Less 2021” Award run by An Táisce. His video on illegal dumping in his own local area of Ballinagore was awarded first prize by the International panel of judges. And indeed, Shane is making something of a name for himself as he has also featured on RTE News2 Day programme with another of his videos on litter.

Cathoirleach Frankie Keena congratulated Shane on his tremendous work and said he enjoyed looking at Shane’s videos and it was wonderful to see a young person with such passion for their environment. It was a terrific achievement to win this award. The Cathoirleach outlined how he was involved in setting up a number of initiatives himself which encourage young people to get involved in local community issues and he appealed to all the students to become active in their community. He said their generation needed to have their voices heard on environmental issues and all other local issues, they were the future of this country. Cllr Keena congratulated Shane’s parents and the school for their support of Shane’s efforts. He finished by presenting Shane with a tablet on behalf of Westmeath County Council Community Development Section to help Shane continue his video making and also informed the gathering that Shane’s achievements would be formally recognised and read into the minutes of the next meeting of Westmeath County council.

Mayor Liam Mc Daniel said as a native of Kilbeggan he was delighted to be here to recognise Shane’s achievement. He said he has been aware of the work Shane has been doing locally to raise awareness about the issue of littering in the Ballinagore/Kilbeggan area. The Mayor said the quality of Shanes videos was amazing and the opening scenes shot in Ballinagore would not be out of place in a Tourism Ireland video, and surely would attract people to the Ballinagore area. Mayor Mc Daniel said it was important to recognise the support Shane gets from his school, his friends and his parents Mark and Aisling. He echoed the Cathoirleach’s words about the importance of young people having an influence on local issues and encouraged them to become active in local organisations. The Mayor presented Shane with a voucher on behalf of Westmeath County Council Environment section.

Principal of Mercy Secondary School Kilbeggan, Garett Farrell, thanked Westmeath County Council for recognising Shane’s award. He welcomed the Cathoirleach and the Mayor and all those in attendance. Mr Farrell said not only had Shane won the regional award, he then won the national award, but to go on then to win internationally was a fantastic achievement. He said the whole school was very proud of Shane’s achievement and said it could not have happened to a nicer young man. He finished by apologising to the 3rd Year pupils that had to leave their class to attend the award ceremony but said he was confident they weren’t too upset to be missing a class! 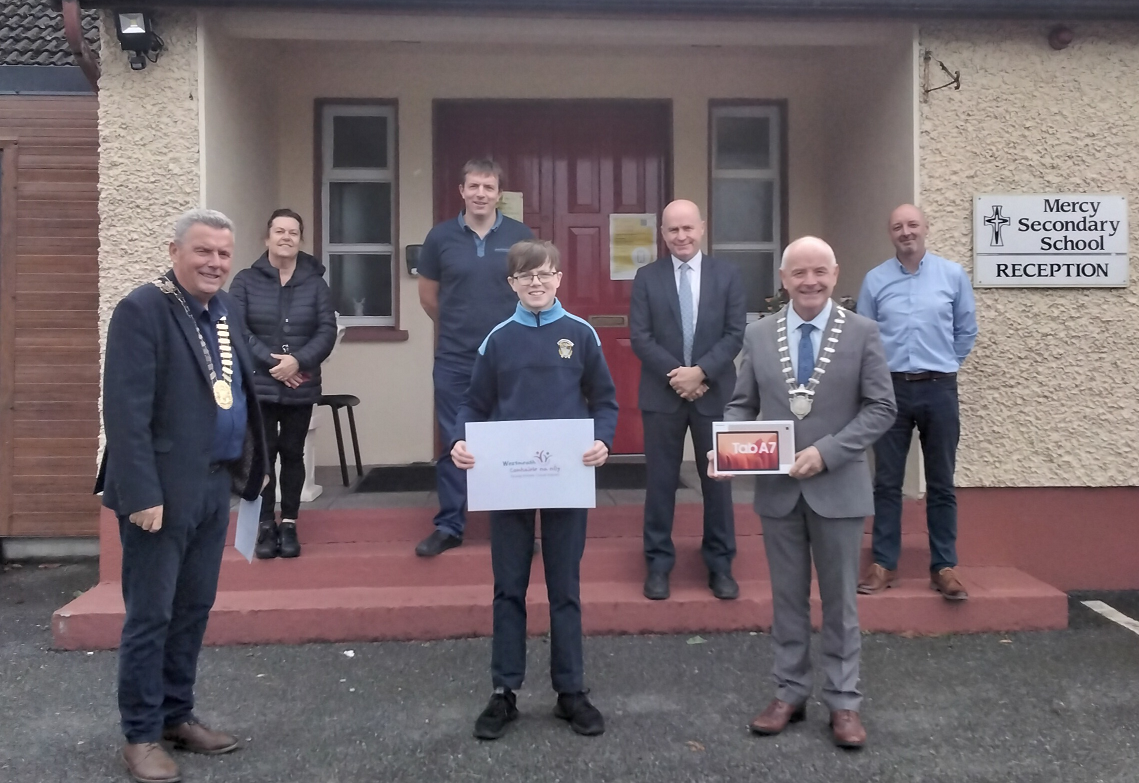