Monday, 23 August 2021 — This week, Westmeath County Council will launch a new mini-documentary focusing on at the capture of Longford revolutionary Seán Mac Eoin by British forces in Mullingar, which took place in March 1921.

The documentary is written and presented by Dr Paul Hughes – whose five-month term as the Council’s Decade of Centenaries Historian in Residence ended earlier this month – and was filmed and edited by Mullingar filmmaker Mark Bennett of CrossCut.ie. It will be available online this Wednesday, 25 August.

The production, which runs to almost twelve and a half minutes, involved the use of actors for a dramatic reconstruction of the events of March 1921, set against the backdrop of modern Mullingar.

Seán Mac Eoin, the famed ‘Blacksmith of Ballinalee’, was one of the most wanted men in Ireland when Crown forces caught up with him at Mullingar Railway Station on the evening of 2 March 1921.

The Longford man had a reputation as a chivalrous but brutally effective guerrilla leader, and at the head of the Irish Republican Army’s North Longford flying column, his leadership made Longford a dangerous battleground for Crown forces.

But his role in the War of Independence came to an end when he was identified and apprehended at Mullingar while returning from Dublin via train – the prelude to a dramatic escape attempt which ended with Mac Eoin being shot and captured.

“We have done our best to map the urban landscape associated with Mac Eoin’s capture and to bring the story to life with our action sequences,” said Dr Paul Hughes. “Landmarks of modern-day Mullingar – the railway station, the Green Bridge, Dominick Street, Railway Row, Mullingar Garda Station (formerly the RIC barracks) and Columb Barracks – are all part of this story.

“The capture of Mac Eoin, his attempted escape and his subsequent shooting was a rare episode of violence in a town where there were no ambushes of Crown forces during the 1919-21 period. It was one of the headline events of the War of Independence in Westmeath, and was a national story at the time.” 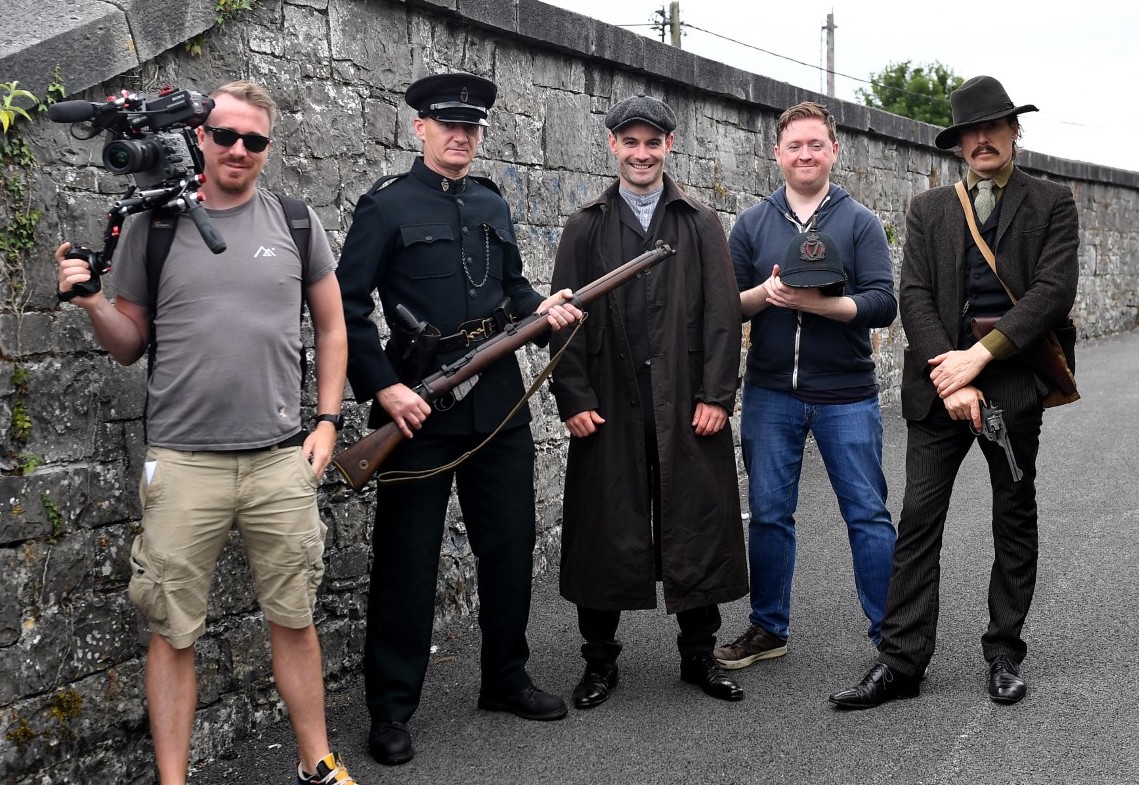 Action sequences in the documentary are performed by the trio of Andrew Dermody, Ken Fitzpatrick and Dave Swift. Andrew, a Castlepollard man and head of history at St Finian’s College, Mullingar, plays the role of Mac Eoin, while Dave and Mullingar-based karate coach Ken portray members of the Royal Irish Constabulary.

“We are grateful to Dave for his input into the project, and his knowledge of the material culture of the War of Independence period,” said Paul. “Between Dave, Andrew, Ken, our filmmaker Mark Bennett and Westmeath County Council’s Heritage Officer Melanie McQuade, I was very lucky to work with such high-calibre people for this project.

Part of the documentary was shot at the Mac Eoin family forge in Ballinalee, Co. Longford. Here, Castlepollard resident Andy Donohoe, a nephew of Seán Mac Eoin’s, talked about his memories of his famous uncle and the events of the spring and summer of 1921 – particularly how the intervention of Michael Collins spared Mac Eoin from execution.

“It was an honour to have Andy, as a close relative of General Seán Mac Eoin, speak to us for this documentary, and to hear what his uncle told him about the events in Mullingar over 100 years ago,” Paul added.

This short film is part two of a project which also involved the production of a mini-documentary on the July 1921 burning of Moydrum Castle, which aired last month.

The Mac Eoin documentary was shot in July and early August, and was produced with the assistance of, among others, Mullingar Gardaí and Iarnród Éireann. It is available to watch this Wednesday on YouTube, at the Westmeath County Council Decade of Centenaries blog, and on Council-operated social media channels.

The documentary project and the Council’s Decade of Centenaries Historian in Residence programme are supported by the Department of Tourism, Culture, Arts, Gaeltacht, Sport and Media.