‘With the Insects at Lincoln’

As part of the Historian in Residence programme, we are developing a booklet of sources related to Westmeath during the years 1918-1923. Such sources are scattered through many libraries and archives in Ireland, internationally and online. Mullingar public library also holds a number of documents from the period, some of which we have highlighted during the past year.

An eye-catching item in the library archive is ‘With the Insects at Lincoln’, Seán Milroy’s collection of cartoons charting life in Lincoln Jail during 1918. ‘With the Insects at Lincoln’ contains 25 original coloured pen-and-wash cartoons, each measuring about 18 x 14cm. Most of the images, which are contained in a notebook, are dated and include captions written by Milroy. 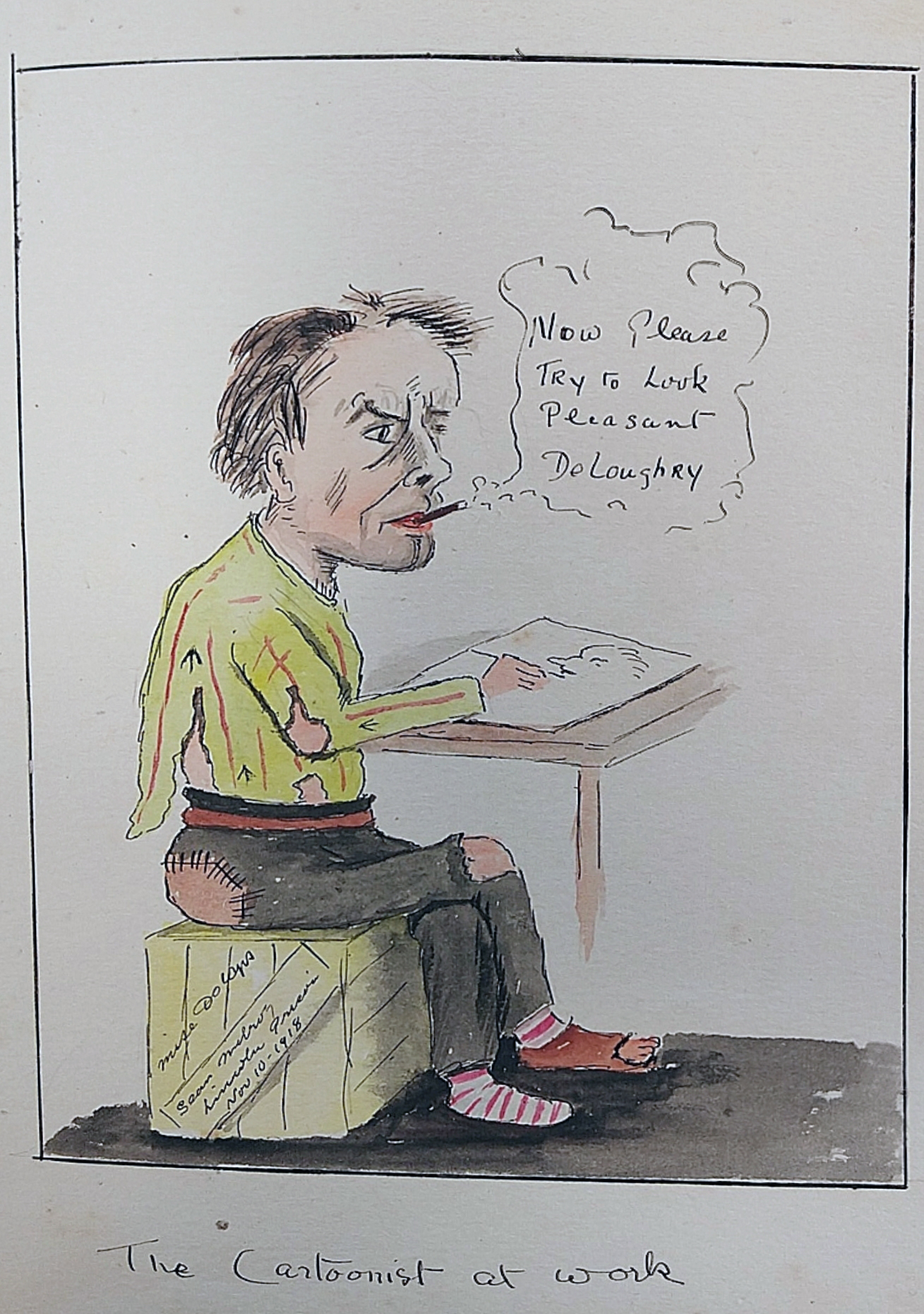 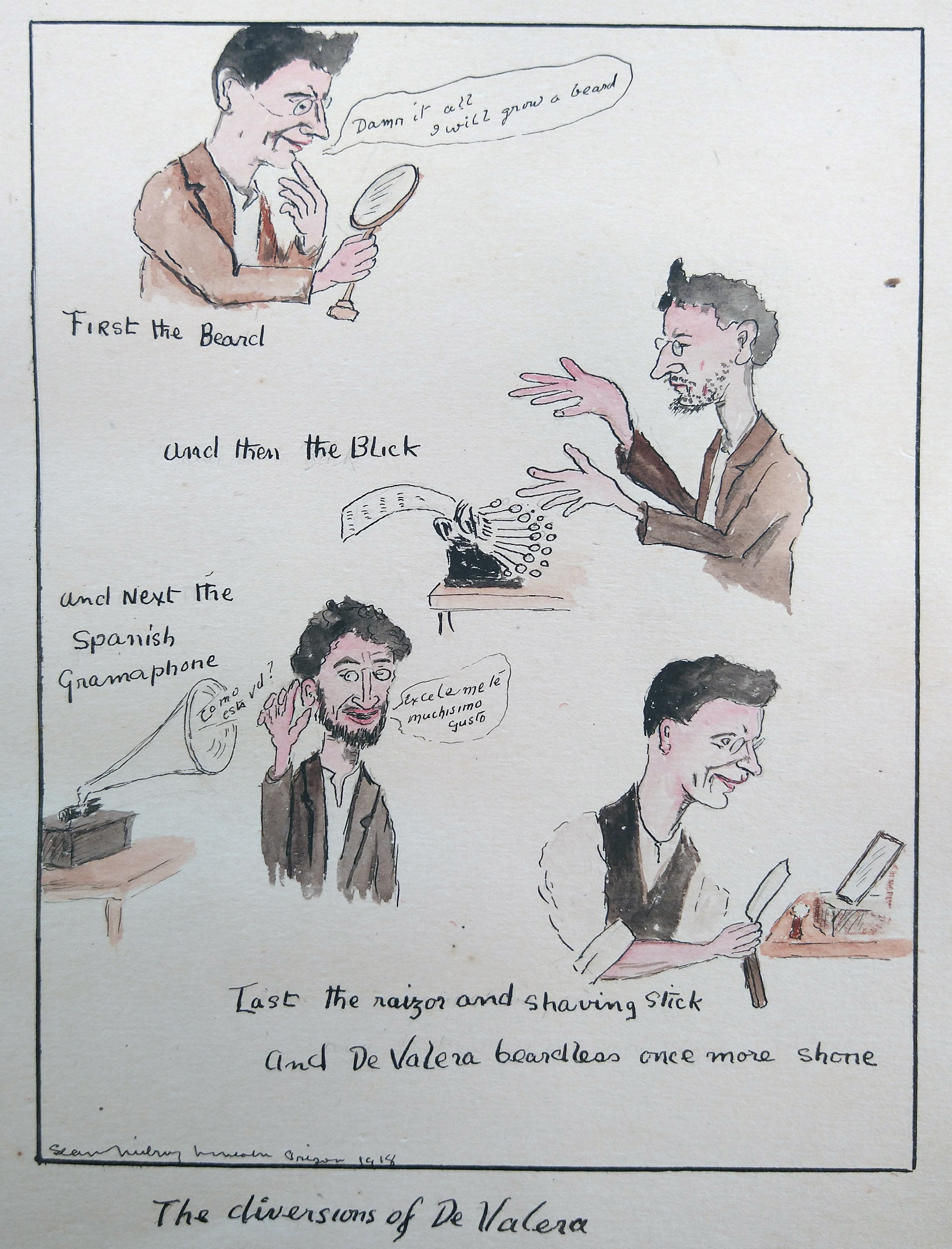 Caption:Éamon de Valera’s short-lived experiment with a beard, as drawn by Milroy.

Milroy is well known for his escape from Lincoln Jail, along with Éamon de Valera and Seán McGarry in February 1919. The three men were arrested the previous May as part of the so-called ‘German Plot’ when the British Administration in Ireland claimed, falsely, that there was evidence of a conspiracy between Sinn Féin and the German military. Over 70 leading members of Sinn Féin were arrested and deported to England. De Valera, Milroy and McGarry were eventually incarcerated in Lincoln Jail, in the east-midlands of England.

Milroy’s artistic skills were integral to the plotting that eventually resulted in the three prisoners making their escape. The plotting began when de Valera, who acted as an altar boy in the jail’s chapel, noticed that the priest had a set of keys that included a master key to the prison doors. Waiting for the right moment, de Valera made an impression of the master key in wax he had collected from the chapel candles. Milroy copied that impression in a cartoon that appeared to be part of a simple Christmas card. The cartoon showed a drunk man trying to fit a large key into a tiny keyhole. The significance of the drawing was not noticed by the prison guards who allowed the card to be posted to Dublin.

In Dublin, Michael Collins and Harry Boland organised a number of keys which were smuggled into Lincoln inside cakes. The first key to make it past the prison guards did not work and de Valera realised that the wax had shrunk as it hardened resulting in an impression that was of the correct shape but which was too small. A second cartoon by Milroy was sent with the key impression disguised in a Celtic knot pattern, although the resulting physical copy also failed. Ultimately, a blank key and a set of files were smuggled into the prison hidden in a fruit cake.

The blank key and files were given to fellow prisoner Peter de Loughry. He had previously taken apart a prison lock using a contraband screwdriver and he used the knowledge gleaned from that endeavour to fashion a master key capable of unlocking any door in the jail. That was they key which de Valera, Milroy and McGarry used on 3 February 1919 to escape their incarceration. Once outside the prison walls, they met with a small group that included Michael Collins and Harry Boland. They had obtained taxis which took the escapees to Sheffield and then to a safehouse in Manchester. 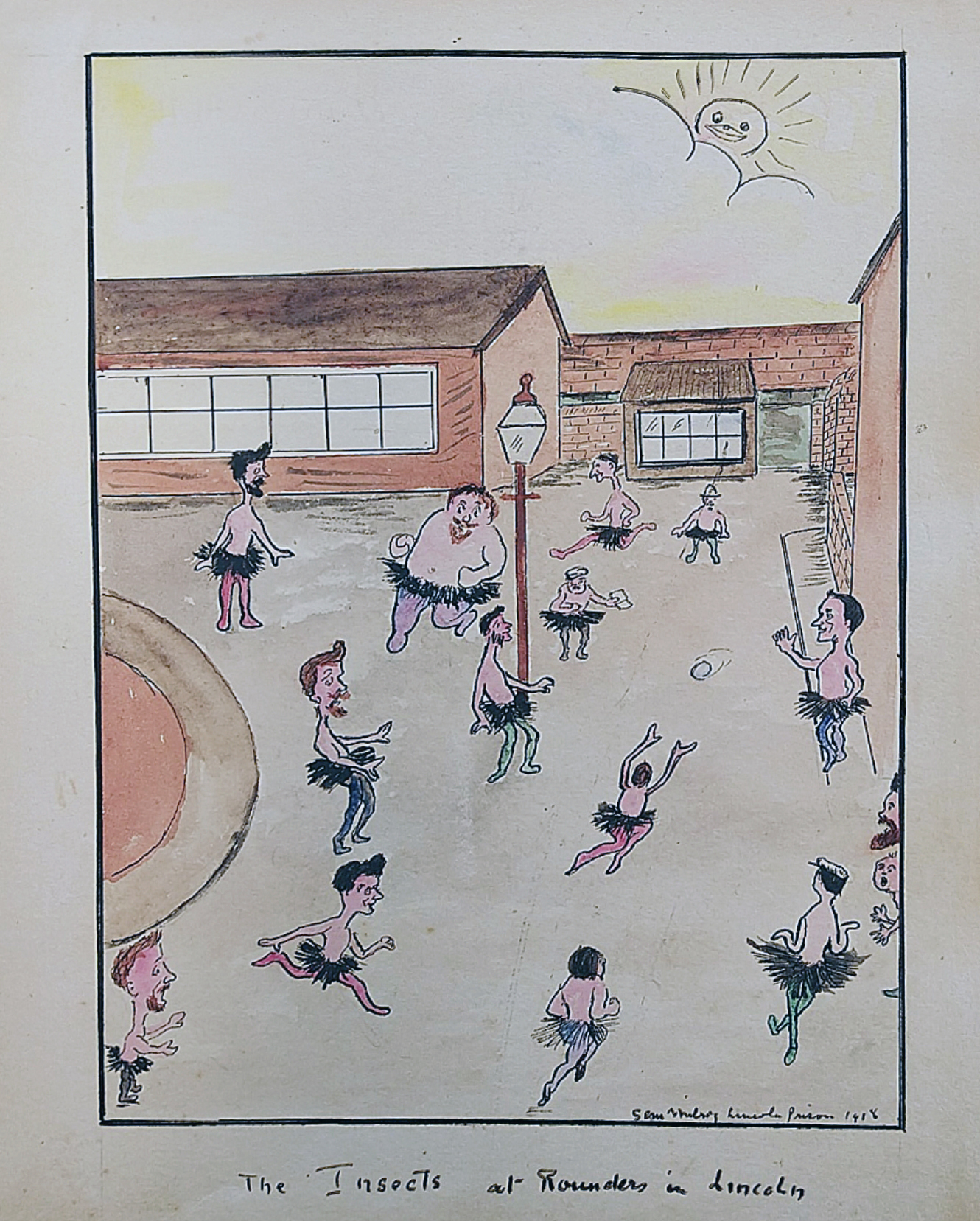 Caption:The ‘insects’, as Milroy described the prisoners, playing rounders in the yard at Lincoln Jail. 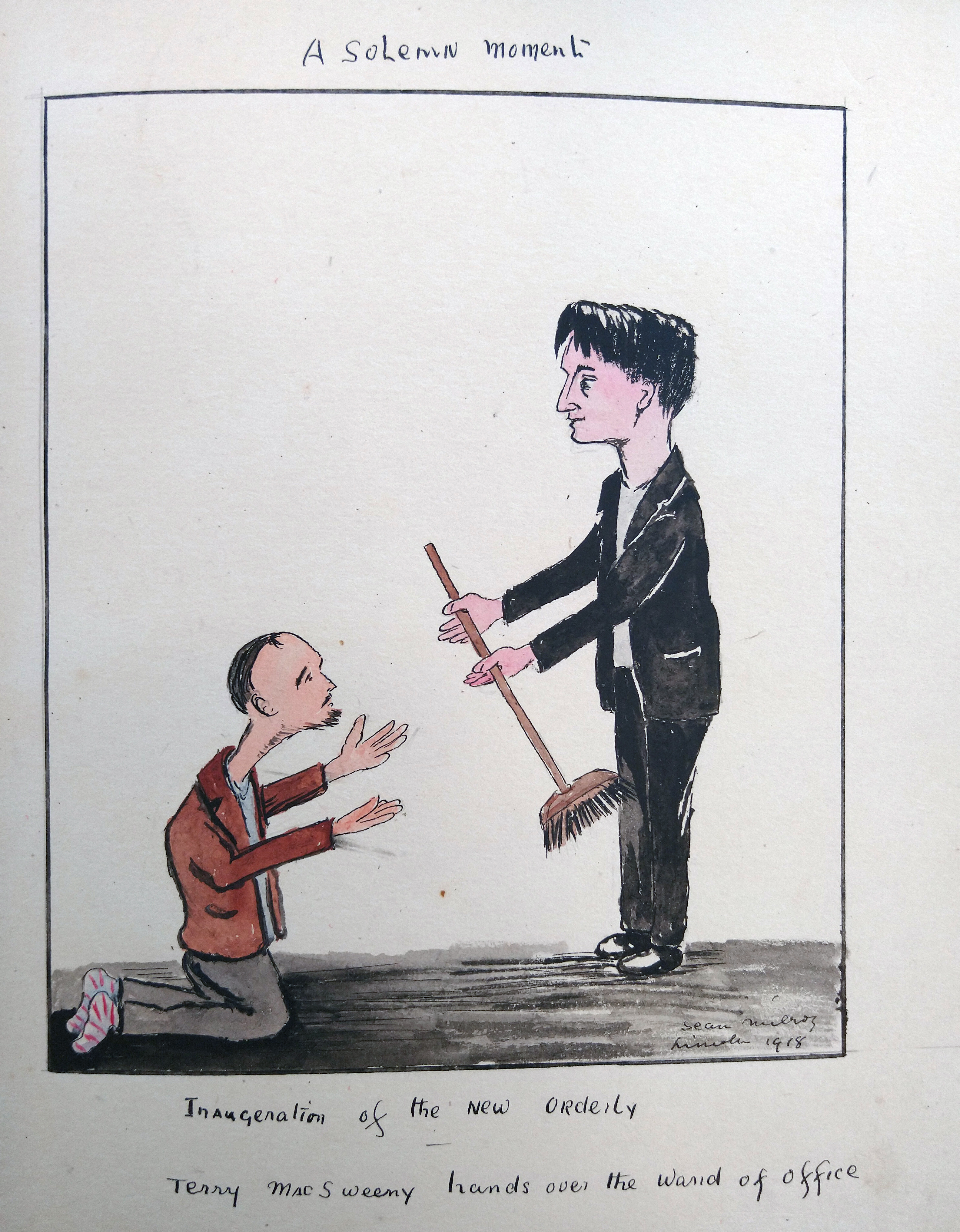 Caption:‘Incarceration of the New Orderly – Terry MacSwiney hands over thee wand of office.’ Terence MacSwiney had been arrested by the Crown forces in March 1918 and then transferred between prisons in Dublin, Belfast, and Dundalk. In September 1918 he was deported to Lincoln Jail. 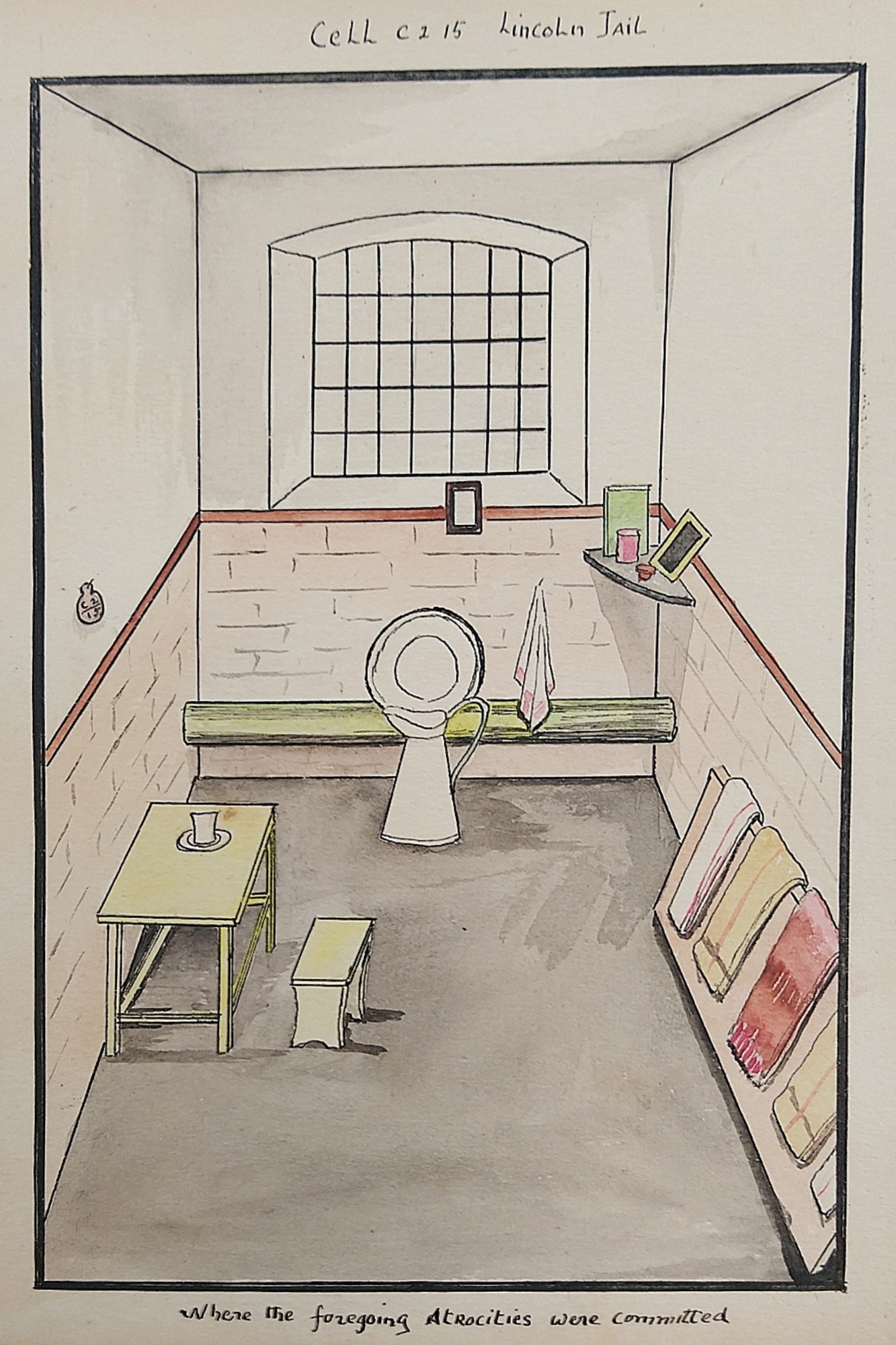 Caption:Milroy’s cell, C2 15, in Lincoln Jail, where, as he said of his cartoons, ‘the foregoing atrocities were committed’.

Born in England in 1877, Seán Milroy moved to Cork in his early adulthood and joined Sinn Féin after befriending Arthur Griffith. In 1915, he served three month’s hard labour in Mountjoy jail after making a speech in Dublin that contravened the Defence of  the Realm Act. A member of the Irish Volunteers, he fought in the Easter Rising and was imprisoned in its aftermath. He served as Sinn Féin’s director of elections in the 1918 general election, although he failed to win a seat in the Tyrone North-East constituency. After his escape he was involved in establishing the Irish Self-Determination League in Britain and was elected unopposed as Sinn Féin TD for Cavan in 1921.

He was also elected from the Fermanagh and Tyrone constituency to the first parliament of Northern Ireland in 1921 but he did not take his seat. He supported the Anglo–Irish treaty and was re-elected for Cavan in 1922. Milroy was elected again in the 1923 general election as a Cumann na nGaedheal TD for Cavan. However, he resigned from Dáil Éireann in October 1924 in protest against the government’s handling of a range of issues, particularly its economic policies. He was elected to the Senate in 1928 and opposed the removal of the Oath of Allegiance in 1932. Milroy remained a member of the Senate until its abolition in 1936 and died in 1946 in Dublin.