‘Tragedy and Shame’: the death of Michael Collins

‘A thrill of horror’, according to the Westmeath Independent, ‘of shame, of despair, of the deepest distress went through the length and breadth of our land on Wednesday morning last when it was learned that General Michael Collins had been shot dead in Cork. Another great Irishman is gone; another great loss has been sustained by Ireland.’ Days earlier, on 22 August 1922, Michael Collins died at Béal na Bláth in West Cork. In this article, we explore the reactions of people in Westmeath to an event that stands as a singular moment in modern Irish history. 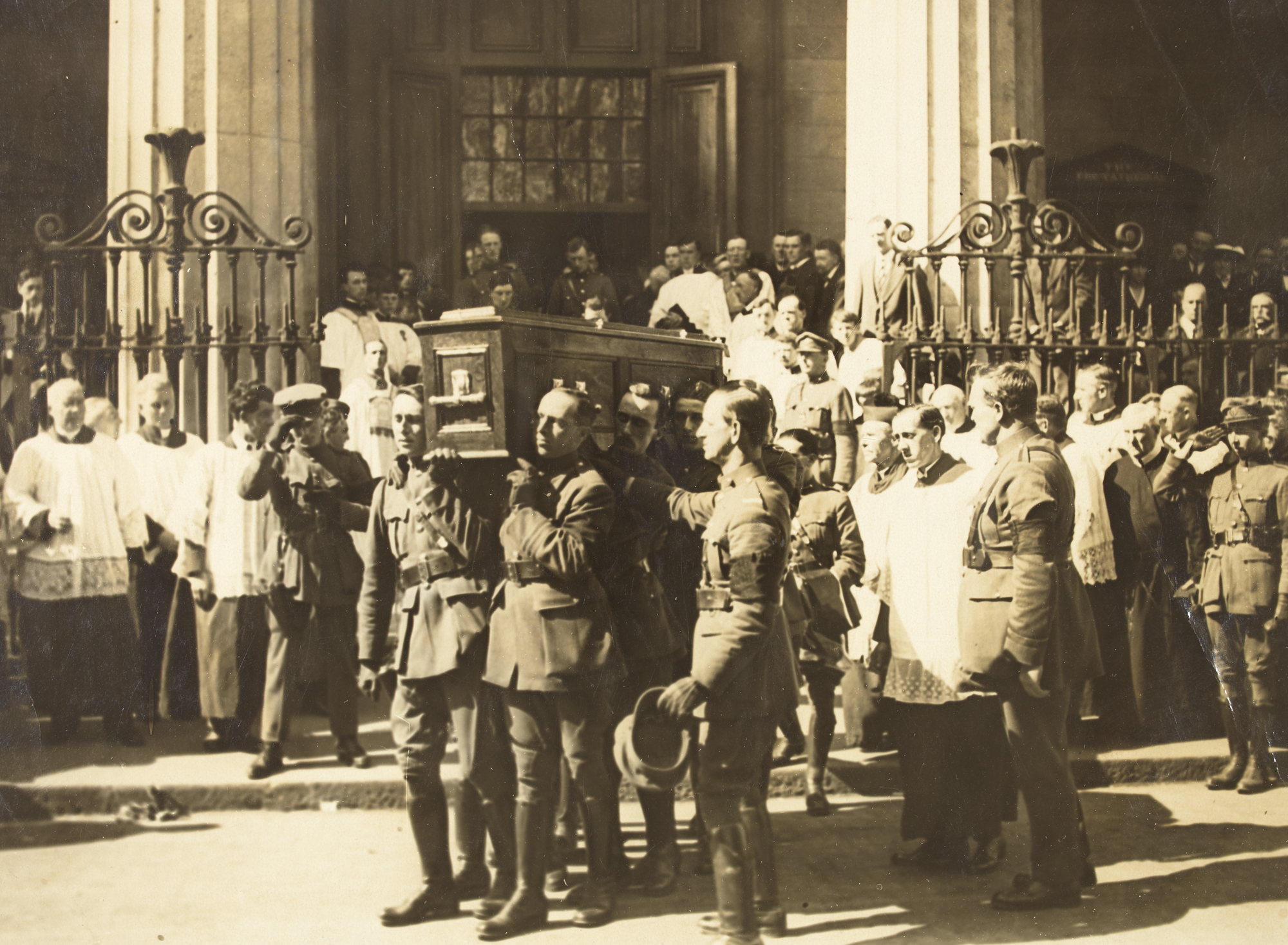 Image: The coffin of Michael Collins being carried from the Pro-Cathedral in Dublin, 28 August 1922 (National Library of Ireland)

According to the Westmeath Examiner, people in Mullingar first heard of Collins’ death during the following morning when the national newspapers arrived by train from Dublin. Rumours had reached Mullingar during the night but, nevertheless, the newspaper reports caused ‘great shock’ and ‘general sorrow was manifested at the loss of such a gallant and heroic Irishman’. Under the headline, ‘Tragedy and Shame’, the Westmeath Examiner’s editorial, likely written by its long-time owner, editor and former home rule MP, John P. Hayden, offered a lament for Collins whom it praised as the ‘most vigorous defender of the Treaty’ in the Dáil: ‘His speeches showed considerable capacity and a wide grasp of the difficulties and responsibilities of the position. He was eager to get to the work of reconstruction which the country so badly needed’. Collins’ death was, the paper told its readers, a shameful moment for the country: ‘To the sorrow and the grief which his death calls forth is to be added a feeling of deep shame and utter humiliation for the disgrace which has been cast upon Ireland.’

In assessing Collins’ life and legacy, the Westmeath Independent editorialised: ‘Michael Collins dared death many a time for Ireland; his brains and pluck, his body and spirit were devoted to his country’s service. If any one man deserved the title of “The Man who Won the War,” he did. He fought the British, he outmanoeuvred them, he forced them to acknowledge Irish Independence, he wrung the Treaty out of them, and now he lies dead, slain by a fellow countryman’s bullet.’ Those words were likely written by Cathail Ó Tuathail, who became editor of the Westmeath Independent when it returned to publication in February 1922, following the destruction of its offices by the British Crown forces fifteen months earlier. The paper, still owned by the Chapman family, was an ardent supporter of the Treaty, which Ó Tuathail saw as ‘evidence of victory’ over Britain.

In the edition after Collins’ death, the Westmeath Independent, many of its columns encased in black borders, provided readers with detailed accounts of the ambush in which Collins was fatally wounded. Those accounts mostly originated in the National Army’s publicity department and they provided an embellished version of events, including the assertion that over 200 anti-Treaty IRA soldiers attacked the small convoy in which Collins was travelling through Cork (the actual figure was probably between 20 and 30). One statement from the National Army’s publicity department claimed that Collins, although fatally wounded, returned fire until the very end. His last words, according to that official account, were directed at his anti-Treaty opponents: ‘Forgive them’.

The Westmeath Examiner, likewise a supporter of the Treaty, gave less space than the Independent to the official statements from the National Army and the Provisional Government. For example, the Examiner, which also placed black borders around its news columns, omitted nearly all details of the ambush. Instead, the paper focused on Richard Mulcahy’s message ‘To the men of the army’ and the ‘Message to the nation’ sent out by the Provisional Government’s publicity department, which said of Collins: ‘He has been slain to our unutterable grief and loss but he cannot die. He will live in the rule of the people…’

‘the freedom of Ireland’

Two days after the Béal na Bláth ambush, the members of Westmeath County Council unanimously agreed to postpone their scheduled meeting, following a motion put forward by Athlone-based councillor P.J. Henry, in whose house Collins had sometimes stayed while vising the area. In making his proposal, Henry included Collins with Arthur Griffith and Harry Boland [both of whom had died earlier in August: Griffith through illness, Boland after being shot by National Army troops] as ‘one of the standard-bearers for the freedom of Ireland’. It was, Henry said, ‘the greatest loss the nation has ever seen to lose three such men’. Other official bodies provided similar statements: Athlone’s urban district council deplored the loss of Collins, describing him as Ireland’s ‘Commander-in-Chief’, while Mullingar’s town commissioners offered their condolences to the Collins family and to ‘the Provisional Government of the Irish Free States’ for the ‘great loss that they and Ireland have sustained’.

Despite the pro-Treaty sentiments of the Westmeath newspapers, there is little reason to doubt their depiction of local reactions to Collins’ death. Across the region, sports events and regattas were cancelled and activities such as auctions and court sessions were postponed. Moate, according to contemporary reports, was ‘plunged into a state of mourning … when the Dublin papers arrived containing the wholly unexpected announcement of the assassination of General Michael Collins’. In Castlepollard, as reported in the Westmeath Examiner, a large congregation attended mass on 26 August for ‘the happy repose of the soul of General Michael Collins’. Similar masses for Collins and, often, Arthur Griffith were held in parishes throughout the county during the following weeks. According to the Westmeath Independent, ‘people were simply horror-stricken that such a leader should have been so foully done to death by his own countrymen in their mad campaign of fratricide’.

In the midlands, the media gave prominence to the opinions of Athlone-born Michael Curley, recently installed as Archbishop of Baltimore in the United States. Curley, on a visit to Ireland at the time, was interviewed by the Westmeath Independent. Apart from lauding Collins, Curley condemned the anti-Treaty campaign, using the Provisional Government-approved term ‘Irregulars’ to describe the anti-Treaty IRA, of whom he said: ‘They may justify themselves by some roundabout mode of reasoning but, to us who are looking at conditions objectively, their actions seem nothing short of criminal.’ The ‘Irish people in America’, he told the paper, would have preferred to hear that Collins was killed by ‘the bullet of the English soldier’ rather than ‘being slaughtered in the County Cork by brother Irishmen’.

Archbishop Curley also played a prominent role in the Athlone ceremonies held on 28 August, the day of Collins’s funeral in Dublin. That morning, shops in the town remained closed until 1pm, while local factories suspended business for three hours from 11am. Masses were held in the Franciscan Church and in St. Mary’s Church, where Curley presided. Both churches were thronged with people but it was the mass in St. Peter’s Church which drew the largest crowd. In attendance were divisional and brigade staff officers from Custume Barracks, who were accompanied by a guard of honour, a firing party, and a detachments of troops under Lieutenant-commandant Bernard Garrahan, the commanding officer of the barracks.

Afterwards, the National Army troops formed up and began to march towards the castle, accompanied by a brass and reed band, and the clergy who officiated at the mass. An estimated three thousand people watched this funeral parade and a contemporary journalist described what happened next: ‘From the church to the Castle Square the procession slowly wended its way, to the mournful strains of the funeral march played by the brass and reed band ... At the Castle Square they formed up in square formation where members of the National Army formed a cordon to prevent the immense crowds encroaching. The clergy, officers, and firing party took up their positions in the centre of the square.’ The firing party then fired three volleys, after which buglers sounded the Last Post as the soldiers presented arms and the officers stood to salute. The scene, according to the Westmeath Independent, ‘was a very affecting one in keeping with the feelings aroused by the untimely and tragic death of Ireland’s great soldier and statesman.’

The war goes on…

On the morning of Monday 4 September, a week after Collins’ burial, high mass for ‘the repose of the souls of President Griffith and General Collins’ was celebrated by the Bishop of Meath, Dr Laurence Gaughran, in Mullingar Cathedral. That day, according to the Westmeath Examiner, work was suspended and ‘there was evidence of public mourning on all sides’. About 100 National Army soldiers, accompanied by a band, marched through the town from Columb barracks to the cathedral. The Examiner later reported that ‘as the sad and impressive military lines moved along, the general public of all classes including many from the country districts, fell in behind on the sidepaths and roadway, and followed towards the Cathedral …’ According to the paper, many ‘mourning badges and button-hole portraits of the late General were worn amongst the public’.

Despite the myriad manifestations of sorrow the conflict continued to rage nationally and in Westmeath. Three days after Collins’s death, an anti-Treaty IRA unit ambushed a car containing Athlone-based officers and soldiers of the National Army as it drove through Glasson. Five people were wounded by gunfire, three fatally: Patrick Murtagh, a civilian, Seán McCormack, a lieutenant in the National Army and Albert Hayes, a National Army volunteer. McCormack, from Moate, died at the scene, while Murtagh, a local egg-dealer from Wineport who was travelling through Glasson on a horse-and-cart at the time of the ambush, died in a local doctor’s house. Hayes, from Tullamore, died over a week later from complications related to his wounds. Ambushes such as those at Béal na Bláth and Glasson signified that the anti-Treaty IRA, despite being pushed from many urban areas, retained the ability to carry out guerrilla attacks across the country. In future articles, we will look in more detail at the Glasson ambush and the Civil War in Westmeath.