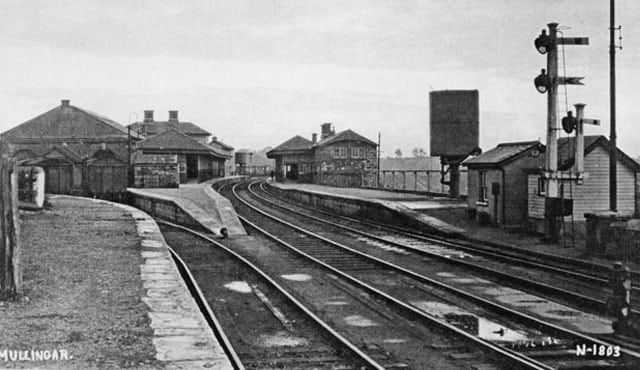 An otherwise sedate Mullingar made national headlines in early March 1921, when one of the most prominent IRA commandants of the War of Independence, Seán Mac Eoin, was shot and captured in the town by Crown forces.

The Mac Eoin incident, the story of which will be told elsewhere on this blog, was a rare violent episode in a garrison town where the IRA had theretofore been restricted to occasional opportunistic acts, mainly against Crown property.

Unlike the Athlone area, which was comparatively more violent than districts further north, no IRA active service unit operated in Mullingar, and at brigade and battalion level, the town’s republicans were plagued by leadership problems. In the main this was due to officers being arrested and interned; in the case of David Burke of Dominick Street, a battalion-level officer and jeweller by trade, inactivity was down to illness (Burke died, aged thirty, of a nervous disease in November 1923).

The leadership quandary in Mullingar was compounded by the fact that on 1 March 1921, the night before Mac Eoin’s arrest, one of the most active IRA officers in the district, Michael McCoy (OC, 1 Battalion, 5 Mullingar Brigade), was, among others, taken into custody as a means of pre-empting the IRA’s plans to rescue Mac Eoin by stopping his train near Enfield.

The following day, Mac Eoin unwittingly ran into a hornet’s nest at Mullingar railway station, where Crown forces awaited his return from Dublin. He was identified by a Royal Irish Constabulary head constable on the platform and taken to the police barracks at Bishopsgate Street. Breaking free of his police escort at the Green Bridge, he attempted to escape via Dominick Street, Railway Row and Grove Street, before being stopped in his tracks by a gunshot to the chest.

The story of Mac Eoin’s attempted flight is one of the standout tales in the long history of Mullingar railway station, but it was not the beginning or end of its story as far as the War of Independence was concerned.

While there may have either been a lack of desire or opportunity to inflict mass casualties on Crown forces in Mullingar, local guerrillas made up for it in other spheres. For example, several repositories, such as the Collins papers and the Military Service Pensions Collection in the Military Archives, highlight Mullingar as an outstanding contributor to the IRA’s intelligence and code-breaking operations.

Local republicans also proved adept at interfering with and destroying military and police supplies, and their work in this regard began during the summer of 1920, before becoming programmatic between March and June of the following year.

IRA actions at Mullingar railway station began as early as 29 June 1920, when twenty republicans descended on the facility, held up the staff and dismantled telephone connections, before destroying five wagon loads of petrol and a military hut. Contemporary police reports stated that the raiders spilled over 4,000 litres of petrol, which came from Oranmore, County Galway and was en route to the Royal Air Force. According to IRA veterans, the estimated cost of the damage came in at a substantial £3,884 (adjusted for inflation, the equivalent of c. £175,000 in 2020).

On 24 August 1920, another raid followed; this time, further supplies bound for the Royal Air Force, including petrol and aeroplane parts, were destroyed by fire. The RIC’s county inspector laid the blame for the incident at the feet of railway employees; credit was later claimed by the IRA under Michael McCoy, one of whose men, a volunteer by the name of Michael Horan, worked as a milesman for the Midland and Great Western Railway Company.

No further actions took place at the railway station until the aftermath of McCoy’s arrest and the capture of Seán Mac Eoin, when command of 1 Battalion passed to McCoy’s subordinates Harry Killeavy (a native of Tullamore) and Seán Grogan. Under their direction, actions at the railway station resumed on 15 March 1921 and intensified over the ensuing weeks and months. On that day, Killeavy, Grogan and six other men destroyed a case of whiskey which was due to be delivered to the military.

Another incident followed on 15 April, when the IRA under ‘A’ Company captain Bernard Reilly took a crate of cigarettes from the goods store and emptied the contents into the Royal Canal. The destruction of these items was part of an ongoing effort by republicans to enforce a boycott of goods coming from Belfast – an anti-partition measure and a protest against sectarian violence and discrimination against Catholic workers. Weeks earlier, the Westmeath Examiner reported that at a meeting of Mullingar Town Commission, local trade union organiser T J Redmond appealed to businesses in the town to do more to support the boycott. Redmond intimated that commissioners ‘would be surprised if they heard the names of the Mullingar traders who were receiving goods from Belfast and of the quantities delivered in the town’. The actions of Reilly and his men sought to redress the balance where Redmond’s persuasion had failed.

The IRA returned to Mullingar railway station again on 24 April and confiscated a consignment of tools destined for use by the military – crowbars, sledgehammers, picks, shovels and more. Six days later, they broke into the goods store at the facility and forcibly opened boxes of weapons intended for the RIC, taking a Webley revolver and ammunition.

Another raid followed on 4 May, with twelve men, including 1 (Mullingar) Battalion officers Harry Killeavy, Seán Grogan and Edward Hynes, setting fire to two wagon loads of military stores, destroying £4,400 worth of Crown property. The group managed to escape and retreat to the countryside when the military and police, attempting to close the net on the perpetrators of these activities, arrived on the scene.

Crown forces were deeply frustrated by the apparent free hand the IRA had in tampering with supplies arriving in Mullingar and took various measures. Police reports for May 1921 stated that two employees at the station had been arrested by the military authorities. One of those apprehended was ‘A’ Company Volunteer Michael Horan, who had used his position as a railway employee to furnish his superior officers with real-time intelligence on the movement of goods.

Meanwhile, as of mid-May, the IRA suspected that the police had installed an informer as a clerk on the station’s parcel desk. Andy Burke, a native of Longford, was the son of an ex-RIC man and was regarded as a ‘bad pill’ by members of the Longford Brigade. Via the IRA’s general headquarters (GHQ), Mullingar Brigade intelligence officer Harry Conroy was warned about Burke’s presence at the station and advised to ‘be on the alert’.

Nevertheless, operations continued at the station throughout the month. On 8 May, the IRA waited until a military guard withdrew before destroying a consignment of military field kitchens. Four days later, the authorities increased their presence at the station, and to circumvent their guard, the republicans boarded a train bound for Mullingar at Clonhugh, near the shores of Lough Ennell, and compelled the driver to stop. Over a period of six and a half hours, they claimed that some £5,000-worth of military stores were unloaded from five wagons and destroyed, including aeroplane parts, pumping engines and cases of bully beef. This was a large operation involving over 20 Volunteers, some of whom kept local residents under guard for the duration.

Further raids took place in May, including the destruction of compressed hay destined for use by the military (26 May). However, IRA activities at the station reduced in intensity thereafter and petered out in the lead-up to the Truce of 11 July. Further RIC weapons were commandeered in a raid on 8 June – an action not reported by the police – while on 16 June, the enforcement of the Belfast boycott continued with the destruction of a delivery of bread hampers from the northeast, as well as whiskey bound for the military barracks.

These incidents aside, the police expressed confidence that the countermeasures they had taken were having the desired effect, with the county inspector telling his superiors: ‘... it is hoped that this form of outrage will diminish, as it has been let known that every time it happens a railway employee will be arrested; and once they have been arrested the Railway Company dismisses them.’

There is a temptation to define activity during the Irish War of Independence purely by looking through the prisms of violence and death. If a county or town failed to achieve the violent intensity of, for example, Cork, Tipperary or Longford, were its guerrillas really active at all? While there were no Kilmichaels or Crossbarrys in north Westmeath, actions such as those carried out at the railway station – while appearing at first glance picayune and low-risk – nevertheless created a palpable atmosphere of revolution and disorder and chipped away at the morale of Crown forces stationed in the town.