The guerrilla phase of the Irish Civil War

In the second of two articles, guest contributor Dr. John O’Callaghan explains how the anti-Treaty IRA responded to the victories won by the National Army during the early weeks of the Civil War. 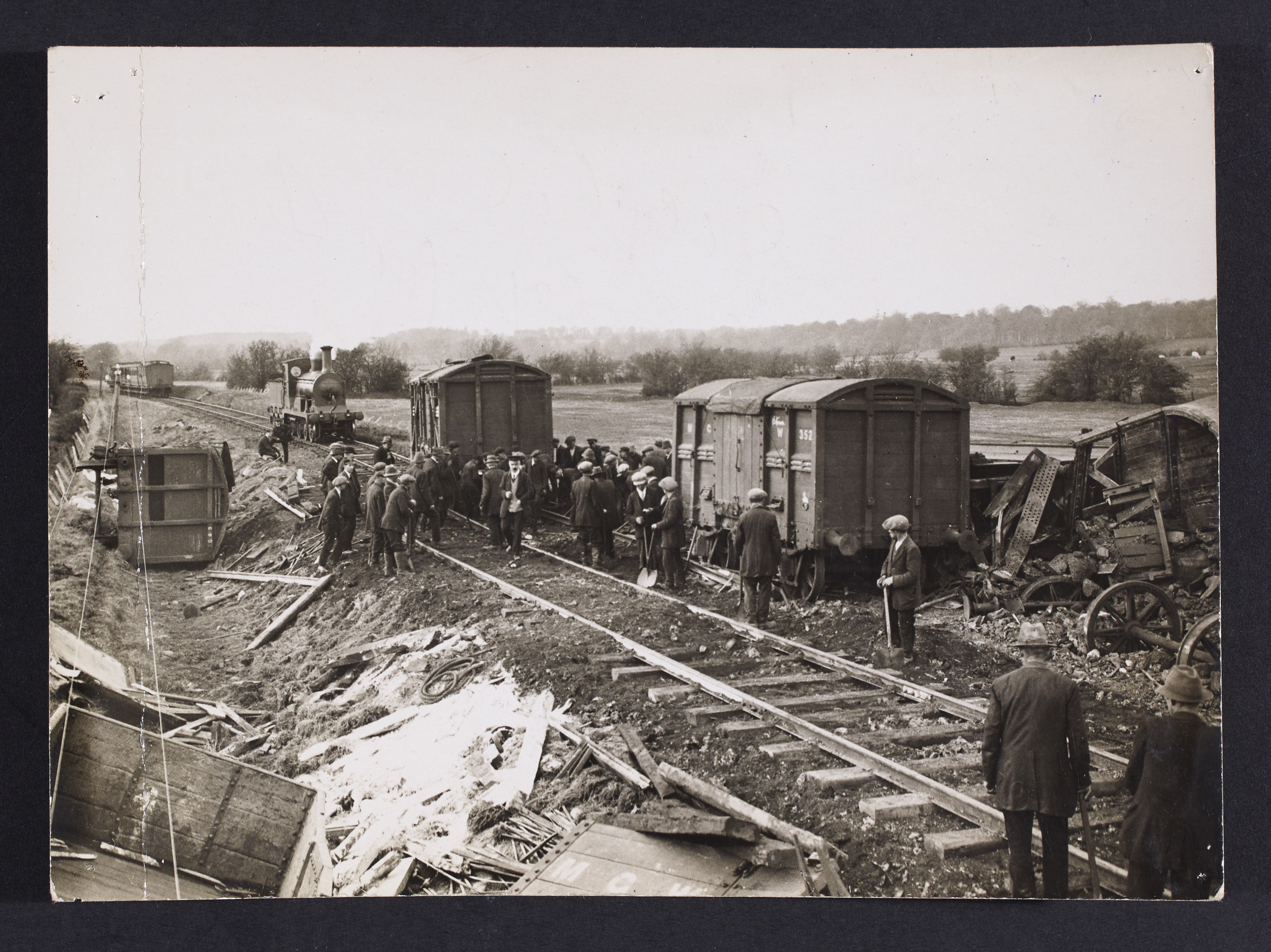 Image: Rail workers at the site of a train crash in Westmeath that occurred after the anti-Treaty IRA destroyed a section of the track. From late 1922 onwards, the anti-Treaty IRA attempted to undermine the state and disrupt the activities of the National Army by attacking crucial infrastructure such as the road and rail networks (National Library of Ireland).

The opening phase of the Civil War was characterised by large-scale, fixed-position, conventional confrontations between the pro-Treaty National Army and the anti-Treaty IRA. This type of warfare featured from the beginning of the battle for Dublin on 28 June 1922 to the point in mid-August when government forces had established control of all the major urban centres in the country.

The National Army won this contest for territory because it had superior resources. As the force of the state, it had greater financial muscle (which meant it could pay its growing number of troops), better communications systems, a broader propaganda reach, a more reliable supply chain and more regular access to heavy equipment and weaponry. In particular, its deployment of artillery at key sites and its ability to land soldiers from the sea and behind republican front lines had been decisive.

The IRA was able to fight the British Crown forces to a stalemate during the 1919-21 War of Independence largely because they adopted hit-and-run guerrilla tactics rather than engaging in conventional warfare. In 1922, after seven or so weeks of conventional warfare against the National Army, the anti-Treaty IRA appeared to be on the brink of collapse. Their belated recourse to exclusively guerrilla tactics meant that they held out until May 1923.

As the war moved into its second, guerrilla phase, the pro-Treaty side suffered a series of setbacks: Arthur Griffith, Chairman of the Provisional Government, died of a stroke on 12 August 1922; Frank Aiken’s anti-Treaty column recaptured Dundalk garrison, along with its 300 National Army troops and their weapons, two days later; and Michael Collins, Commander-in-Chief of the National Army, was killed in an ambush on 22 August. When the state attempted to impose its writ more widely, intensified anti-Treaty activity made republican heartlands in parts of Cork, Kerry, Tipperary and the west ungovernable. National Army casualties increased and there were regular republican attacks in Cork and Dublin cities.

As mutual antipathy escalated, the war degenerated into a wholesale pattern of cruel reprisals and tit-for-tat killings. The worst of the cycle of atrocities occurred in areas where the IRA guerrilla campaign was most determined, so the toll of fatalities rose steeply in Cork, Kerry and Tipperary. The Public Safety Bill of 27 September 1922 signified that the government believed it needed to institute a form of martial law to assert its authority. The legislation allowed for the execution of anti-Treatyites bearing arms, and from November 1922 the state chose to implement this option. There were at least eighty-one such official executions by firing squad under a variety of emergency powers legislation and many more unofficial, extrajudicial execu­tions. Republicans retaliated through targeted assassinations and wholesale arson attacks. When Cork TD Seán Hales, a supporter of the Public Safety Bill, was shot dead, senior IRA figures Rory O’Connor, Liam Mellows, Joe McKelvey and Dick Barrett were executed. When the house of Seán McGarry TD was burned, his seven-year-old son was killed.

The ‘Big Houses’ associated with the landed class came under a ferocious IRA onslaught. In 1919-21 the logic for such attacks was clear: as a response to British burning of republicans’ houses; to prevent their use as a barracks for Crown forces; to force the enemy to allocate resources to their protection; and to undermine the old order and one of its most potent symbols. In 1922-23, burning big houses was an IRA reprisal against the Free State political elite and dozens of the houses destroyed were those of senators. Those attacks were still relatively easy to achieve even when IRA capability was drastically reduced: it was a form of populism at a time of increasing demand for land division – the ‘landlord’ was still something of a bogeyman in rural Ireland. But in purely military terms, the burnings were largely meaningless.

By late 1922, however, IRA Chief-of Staff Liam Lynch’s focus was on systematic destruction, especially of road and rail infrastructure. Such destruction came at a significant cost to communities nationwide. Rather than defeat the National Army, the idea was to prevent the state from functioning and then to bankrupt it. Republican strategy did succeed in pressurising the government financially. For example, Republicans concentrated on frustrating Free State tax collection while making efforts to generate their own income, including through enthusiastic efforts to impose a dog license levy.

In January 1923 the Free State executed 34 prisoners in an attempt to intimidate IRA Volunteers and their supporters. As many as 12,000 republican men and 300 women were interned before the war ended. At the same time, as many as 55,000 men were eventually recruited into the National Army, saturating guerrilla territory. IRA morale was gradually worn down, with calls for peace talks or surrender becoming more frequent. The guerrillas were increasingly pinned down and limited to minor acts of sabotage.

Kerry remained a hotbed of resistance, however, and this was where the war’s most brutal outrages were perpetrated. In revenge for the deaths of five pro-Treaty soldiers in a booby trap bomb at Knocknagoshel in early March 1923, the National Army used mines to massacre eight prisoners at Ballyseedy, near Tralee, another four near Killarney and a further five near Cahirsiveen. For a government building a state on the principles of law and order, such unchecked carnage posed major questions about the nature of that new state and the rule of law. The Free State, while eventually victorious and successful in restoring order, had done much to create an enduring climate of fear and loathing.

By April 1923, the war was nearing its end. Liam Lynch was killed on 14 April and replaced as IRA Chief-of-Staff by Frank Aiken. Within weeks, Aiken called a ceasefire and then ordered his fighters to ‘dump’ (conceal rather than surrender) arms before returning to their homes.

‘Dr John O’Callaghan works in Atlantic Technological University, Sligo. He has published widely on the history of the Irish Revolution.’