The first week of the Irish Civil War in Westmeath: part two 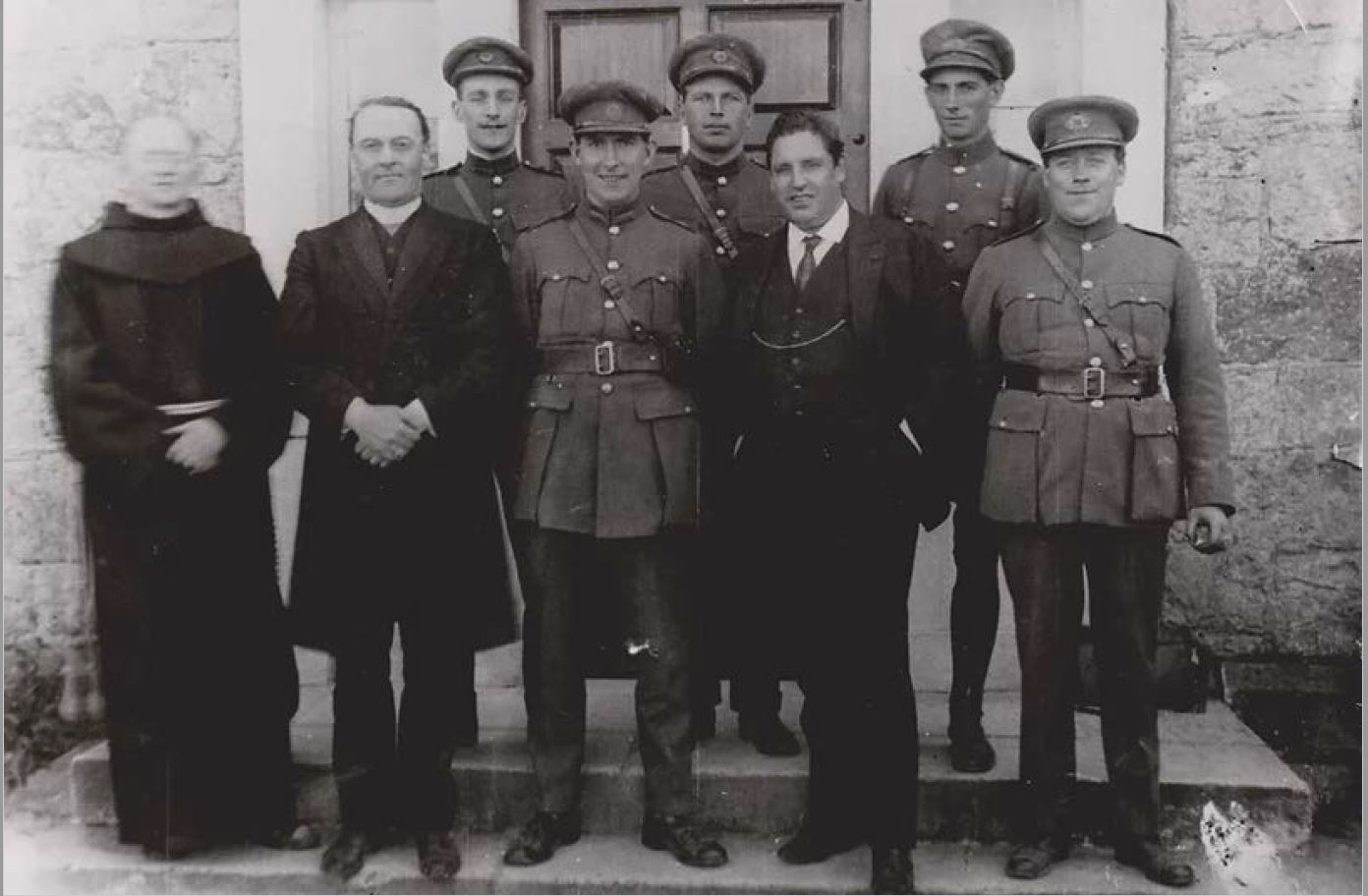 Reports of the outbreak of civil war published by the Westmeath Independent were redolent of those sensational and bewildered paragraphs which appeared in the Westmeath Examiner in the wake of the 1916 rising. ‘No news and too much rumour’ read one headline, while another column carried eyewitness reports of the fighting in Dublin. The witness, an unnamed Athlone merchant, was bound for Dun Laoghaire in the company of friends on Sunday, 2 July, and described his experiences en route to a Westmeath Independent correspondent for the paper’s 8 July edition:

At Bonavalley Bridge, Moate, and various points I was held up by sentries who on the production of my permit allowed me to proceed with little delay. I took the route by Moate, Horseleap, Kilbeggan and Moyvalley. At the latter place I found that the bridge on the main road spanning the river was blown up and I had to take a circuitous route to Mullingar, where I got on the main road again on which I proceeded about four miles, when I was again stopped by a road blocked with trees.

The merchant caught a glimpse of some of the intense fighting and shelling in Dublin city centre, and the damage caused by the battle. When travelling on Adelaide Road, he encountered Fr Fridolin, OFM, Merchant’s Quay, the former Guardian of the Franciscan Friary in Athlone. The friar accompanied the traveller through some anti-Treaty checkpoints, and regaled the visitor with stories of the massive explosion at the Four Courts on 30 June.

Back in south Westmeath, the local experience of the first week of civil war was substantially more dramatic than that of towns and villages to the north. Athlone was abuzz with wild rumours that were, for the most part, unfounded. The Westmeath Independent reported that the closure of railway lines left Athlone isolated and reports were doing the rounds that anti-Treaty IRA were marching on the town in large numbers from the direction of Boyle, County Roscommon. Another report which suggested that Mullingar was ‘in the throes of a terrible conflict’ turned out to be fiction. The newspaper reported that women approached soldiers in the streets of Athlone asking, in fearful tones, if the town was likely to be attacked.

The substantial increase in military activity did not help to assuage the concerns of the citizenship. Part of this was the introduction of checkpoints and a permit system in Athlone which placed tight controls on travel into and out of the town. With the military in possession of the railway stations, rail traffic ground to a halt and there were concerns about potential food shortages, to the extent that Athlone Trades Council and Athlone Urban Council moved to conserve local supplies of food. There was also a worry about the potential impact which a prolonged conflict would have on the local economy, particularly with regard to the large number of people employed on the railways.

However, the Westmeath Independent, whose reportage came across as strongly pro-Treaty, sought to reassure its readers that the Provisional Government, the National Army and the man ultimately responsible for the town’s security, General Seán Mac Eoin, were taking the necessary steps to ensure a quick resolution to the conflict. A strong presence at Custume Barracks was complemented by detachments which were established in surrounding towns and villages. In the first week of the conflict, much of the activities engaged in by Provisional Government troops involved visits to outlying areas and approach roads to Athlone, where the anti-Treaty IRA were felling trees, blocking roads and severing telephone connections. The Independent reported that in rural south Westmeath, there was a sense of a return to the terror of the ‘Black and Tan era’, with local sources claiming that the republicans were holding men at gunpoint to coerce them into chopping down trees and block roads. When the National Army sought to clear the roads, they also commandeered local help in areas like Moydrum, Ballykeeran, Glasson and Bealnamulla.

Although the military moved quickly to make arrests, the IRA were for the most part holed up in the surrounding countryside. Thomas Berry, one of those arrested on 29 June, was released from custody because his father was friends with an officer in Custume Barracks. Berry subsequently joined an IRA active service unit in south Roscommon and was later involved in ambushes against Provisional Government forces. Thomas J. McGiffe, the officer commanding the (anti-Treaty) Athlone Brigade IRA, ordered his men to focus on the rural military outposts which had been established by Mac Eoin prior to the outbreak of civil war. On 28 June, the day that the National Army began shelling Executive forces at the Four Courts, McGiffe ordered an attack on the outpost barracks in Ballymore. The IRA were also very active in the Glasson and Tang areas, occupying an outpost at Littleton and disarming a National Army soldier. In response to the latter, Government reinforcements arrived and chased the IRA men to Ballymahon under intense gunfire. Further south, at Kilgarvan, near Castledaly, anti-Treaty forces held up a train.

On Wednesday, 5 July, the effects of the conflict – now a week old – began to be felt in Athlone and south Westmeath. Sporadic fighting erupted between Provisional Government forces and the IRA in the Tang area. At Creggy, troops of the National Army’s Inny Brigade under Brigadier General Dinnegan were ambushed. A number of soldiers were badly injured in the attack; Dinnegan seriously so, while Vol. Harry McDermott’s face and hands were severely wounded, and a Vol. Campbell received a bullet to the chest which lodged just under his heart. The two enlisted men were transferred to the military hospital, where Campbell was interviewed by a Westmeath Independent correspondent. He said that their patrol had been hit by ‘a shower of bullets’. Reinforcements were despatched from Custume Barracks and the army claimed to have wounded three of the IRA ambush party.

On the same day, a detachment of soldiers left the Athlone barracks and went to Shannonbridge to retake an outpost in the west Offaly town, complete with artillery pieces. The anti-Treaty IRA occupying the barracks fled on their opponents’ arrival, and the newspapers stated that the soldiers later returned to Athlone and were cheered loudly by residents.

However, any celebration of army successes in Athlone was tempered by the news that a young man from the town, twenty-year-old Vol. John Blaney, had been killed by snipers during a National Army patrol in Ferbane. Blaney was the son of widower William Blaney of Wolfe Tone Terrace. The Blaney family worked in Athlone Woollen Mills, but John had signed up for army duty and became an orderly to Brigadier George Adamson, who was murdered in Athlone two months before the civil war began. The Westmeath Independent stated that Blaney was a member of the Gaelic League and the Clan Uisneach Pipers Club, and had a ‘promising career’ ahead of him in the army. However, on entering Ferbane on the morning of 5 July, his patrol was ambushed and Blaney was shot in the head. The following day (Thursday), another Athlone man, Sgt Frank Balfe of Main Street, was killed in a National Army action at Boyle.

Blaney’s death, the ambush at Tang and the continuing restrictions on travel heightened anxieties in Athlone and south Westmeath. Later on the evening of 5 July, residents of Athlone were alarmed by a sudden outburst of rifle and machine-gun fire. This was the sound of an ambush on Government forces at Cornamaddy, after which a fierce gun battle ensued which resulted in no casualties on either side. By Thursday, the Westmeath Independent correspondent reported that the town of Athlone was ‘quiet’, and the first week of the civil war in the Athlone area ended with a whimper. Despite the incidents of 5 July, the National Army could confidently declare in An t-Óglach of the previous day that Athlone and the entire Midlands was firmly under its control.