The conventional phase of the Irish Civil War

Dr John O’Callaghan, our latest guest contributor, provides an overview of the fighting during the early stages of the Civil War. 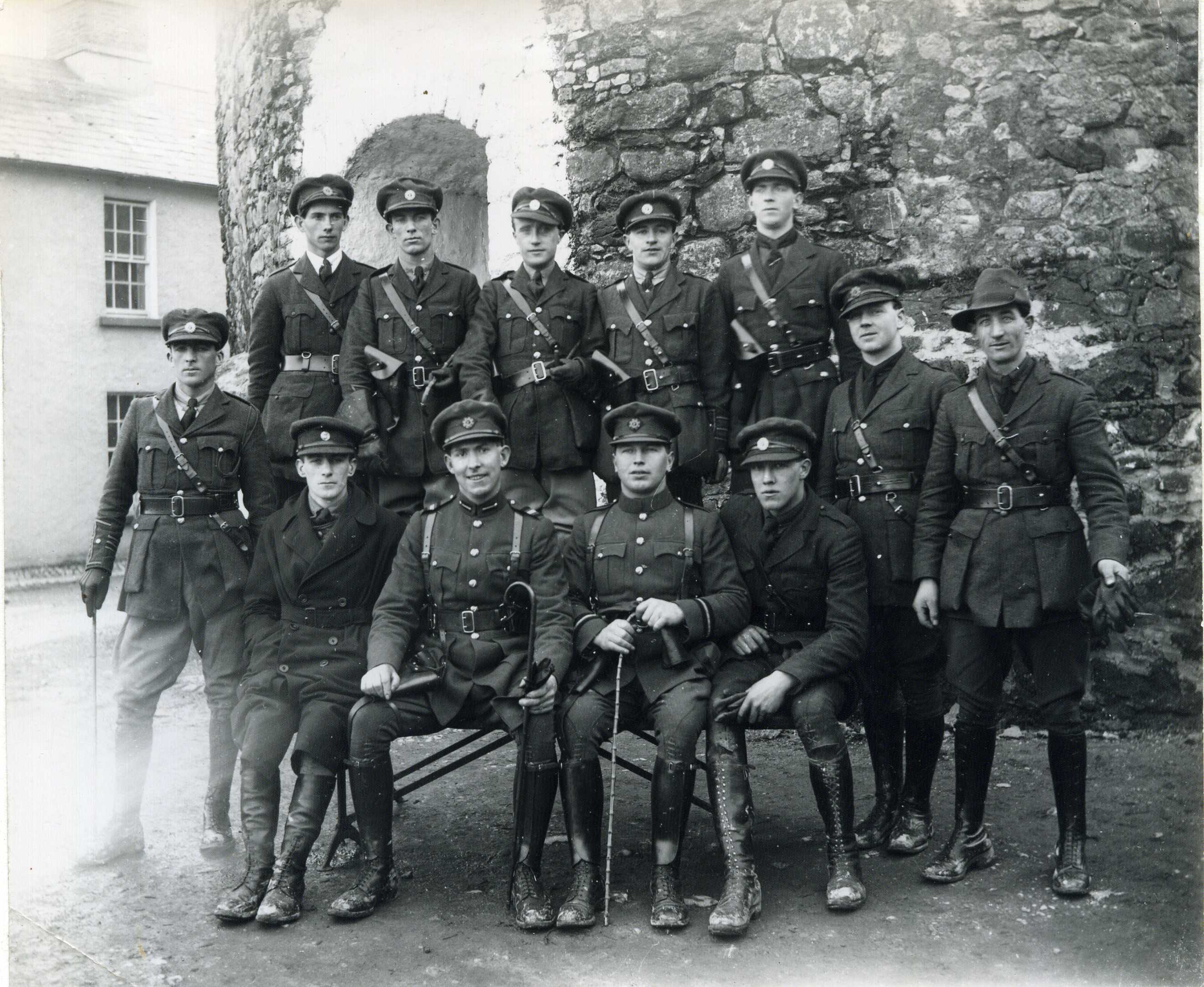 Photo: A group of National Army officers pictured with Seán Mac Eoin (seated, second from left) outside Athlone Castle in 1922. During the early weeks of the Civil War, Mac Eoin’s command in Athlone, along with Michael Brennan’s in Clare, stood between anti-Treaty IRA forces in the south and west of the country (Athlone Public Library).

The opening, conventional phase of the Civil War was characterised by large-scale confrontations between the anti-Treaty IRA and the pro-Treaty National Army in the summer of 1922, after which the National Army had established government control of nearly all the big towns and all of the cities in the country. The set-piece encounters of late June, July and early August then degenerated into lingering, excruciating IRA guerrilla and Free State counter-insurgency campaigns. An initial reluctance to fight a civil war was replaced in many quarters by growing mutual antipathy as the conflict wore on.

At its outset, the war was finely poised. The balance of manpower, weaponry and fighting experience favoured the IRA and they dominated outside of the capital. Vitally, however, the pro-Treatyites held key positions for moving against anti-Treaty strongholds – Nenagh against Limerick and Kilkenny against the south-east for example – while Michael Brennan in Clare and Seán Mac Eoin in the midlands stood between republicans in the south and west. Mobility was one of the fundamental features of the conventional phase of the war, and the Free State, with its greater resources, won the race for territory as the IRA dallied. Furthermore, while recruits to the National Army were hastily trained and unproven, it soon had tens of thousands of men and a reliable supply of British weaponry.

The early fixed-position fighting allowed the National Army to capitalise on its superiority in heavy equipment, particularly artillery. The IRA had no artillery of its own and no anti-artillery defences or counter-measures. Its expertise lay in conducting guerrilla warfare but the level of civilian support that had allowed the IRA to compensate for deficiencies in transport, supplies and communications during the War of Independence was no longer forthcoming. Republican commandeering and levies caused friction with civilians. A distinct advantage that the National Army enjoyed when it came to dealing with civilians was the financial support of the Provisional government, thanks to credit from the Bank of Ireland. It could purchase supplies, its communication system was functional, and it won the censorship and propaganda battles too.

The war started with the battle for Dublin, and the National Army shelling of the anti-Treaty garrison in the Four Courts from about 4 a.m. on 28 June. The Four Courts surrendered on 30 June. Cathal Brugha urged Oscar Traynor, the commanding officer of the Dublin Brigade of the anti-Treaty IRA to revert to guerrilla tactics at this point but Traynor maintained the defensive stance that largely defined republican strategy in the opening months of the war. The remaining IRA positions in central Dublin, including a large block of buildings on O’Connell Street, held out for a week after the fall of the Four Courts.

Defeated in Dublin, with the National Army making quick headway through provincial Leinster, and taking Galway city and towns in Mayo, Sligo and Donegal, which were cut off from possible southern republican reinforcements, the IRA now concentrated on consolidating its power in Munster. A defensive line, running from Limerick city in the west, through the towns of Tipperary, to Waterford city in the east, marked the frontier of the ‘Munster Republic’. Liam Lynch, anti-Treaty Chief-of-Staff for most of the war, made the Munster Republic the heartland of IRA resistance. Limerick city was of particular strategic importance because it served as a gateway (or a barrier) between the south and west of the country. It was also vital to ensuring that National Army bases in Clare and Athlone did not become isolated from each other.

Lynch set up his command in Limerick in early July. Still hoping for reconciliation with old comrades, Lynch agreed a truce with his Free State counterparts in the city, who used the delay to strengthen. The battle for Limerick eventually began on 11 July. There was a stalemate until Free State artillery arrived on 19 July and quickly reduced one IRA barracks, forcing its surrender. Realising that none of its main positions were defensible against artillery, the IRA burned Limerick’s barracks to deny them to the enemy and evacuated on 21 July. Waterford city fell to the National Army on the same day, artillery again proving decisive, and the tide also began to turn against republicans in Tipperary, where Treatyites took Clonmel.

After losing Limerick, the IRA retreated south. The town of Kilmallock and its hinterland blocked the National Army’s route to Cork and became the location of two weeks of intense line fighting (the only such fighting of the Civil War). This fairly conventional style of warfare – with the opposing sides squaring off across a fluid front line – favoured the better-equipped National Army, but the key development in the battle for Kilmallock was the opening of a second front to the rear of the ‘Munster Republic’ when seaborne National Army troops landed on the coasts of Kerry and Cork in early August. The Kerry and Cork contingents at Kilmallock abandoned the front line to defend their home patches. Overcoming determined resistance on the outskirts of Cork, the National Army marched into the city on 10 August. The coastal landings had proved a master stroke. As the Munster Republic contracted into west Cork and Kerry, and with the National Army holding all significant population centres, the anti-Treaty IRA had little choice but to revert to exclusively guerrilla tactics.

The pro-government press touted the complete rout of republicanism and imminent victory, but this was erroneous and rash. Having won the conventional phase of the war, the pro-Treaty side suffered a series of setbacks: Arthur Griffith, Chairman of the Provisional Government, died on 12 August; Michael Collins, Commander-in-Chief of the National Army, was killed in an ambush on 22 August; and there was an upsurge in IRA guerrilla attacks and successes around the country in late August and September, with much of Munster ungovernable. The war was not over and the worst was yet to come.

Dr John O’Callaghan works in Atlantic Technological University, Sligo. He has published widely on the history of the Irish Revolution.