On Tuesday, 21 September 2021, the new digital exhibition – everest1921.com – was launched in Belvedere House by renowned mountaineer and author, Frank Nugent. The exhibition commemorates the 1921 reconnaissance mission to Mount Everest, led by Charles Howard-Bury, who grew up in Charleville Castle and who resided at Belvedere House for much of his life.


Howard-Bury was a superb leader, guiding his team on the arduous journey from India and through Tibet. On the way, he took a series of wonderful photos of Tibet and its people, recording stories and facts as he did so. Many of those photos and papers are now in Mullingar Public Library in the Charles Howard-Bury Collection, a collection that draws international interest.

That collection is explored in the exhibition. It is researched and curated by Ian Kenneally, Historian in Residence for County Westmeath, who has brought together a wealth of material, making it accessible to a public audience. The exhibition is enlivened by maps, recordings and interviews with Frank Nugent, who has followed in the footsteps of Howard-Bury. Frank was deputy leader of the Irish expedition to Mount Everest in 1993 which put Dawson Stelfox atop the world’s highest mountain. Below, we attach a selection of images taken in 1921, along with Howard Bury’s descriptions of the circumstances behind each photo. 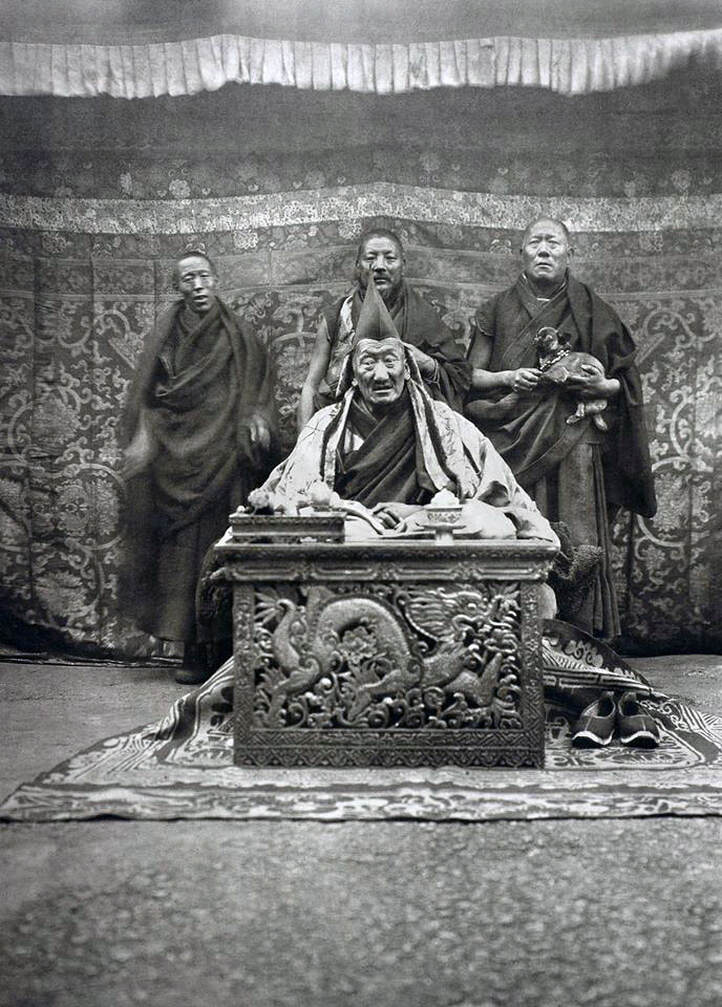 Howard Bury's photograph of the Abbot of Shekar Chöte became a sensation in Tibet: 'Before leaving we went in to see the Head Lama who had lived over sixty-six years in this monastery. He was looked upon as being extremely holy and as the re-incarnation of a former abbot, and they therefore practically worshipped him. There was only one tooth left in his mouth, but for all that he had a very pleasant smile. All around his room were silver-gilt Chortens inlaid with turquoises and precious stones and incense was being burnt everywhere. After much persuasion the other monks induced him to come outside and have his photograph taken, telling him that he was an old man, and that his time on earth was now short, and they would like to have a picture of him to remember him by. He was accordingly brought out, dressed up in robes of beautiful golden brocades, with priceless silk Chinese hangings arranged behind him while he sat on a raised dais with his dorje and his bell in front of him, placed upon a finely carved Chinese table. The fame of this photograph spread throughout the country and in places hundreds of miles away I was asked for photographs of the Old Abbot of Shekar Chö-te, nor could I give a more welcome present at any house than a photograph of the Old Abbot. Being looked upon as a saint, he was worshipped, and they would put these little photographs in shrines and burn incense in front of them.' (Photo taken from Mount Everest - the Reconnaissance, 1922). 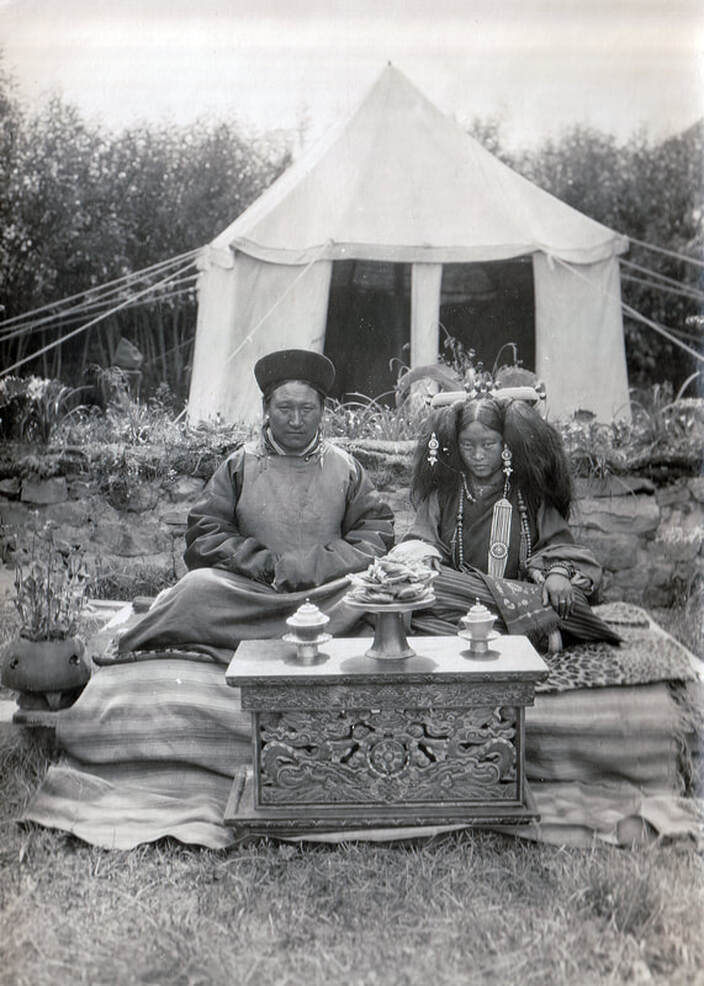 The 'Dzongpen of Kharta and his Wife', photographed by Howard-Bury. He later described the scene: '...with Bullock, I went to pay an official visit to the Jongpen [governor - both Dzongpen and Jongpen are used in the official narrative] at Kharta Shiga. He had made great preparations to receive us, and had put up a large tent in which Chinese carpets and tables were set out with pots of flowers arranged all round. Soon after our arrival we were given a most copious meal: bowl after bowl of well cooked macaroni and mince with pickled radishes and chillies were set before us. After we had finished this meal, I induced the Jongpen and his young wife to be photographed. She had a most elaborate head-dress of coral and pearls, with masses of false hair on either side of her head.' (Marian Keaney/Westmeath Library Services: Howard-Bury Collection) 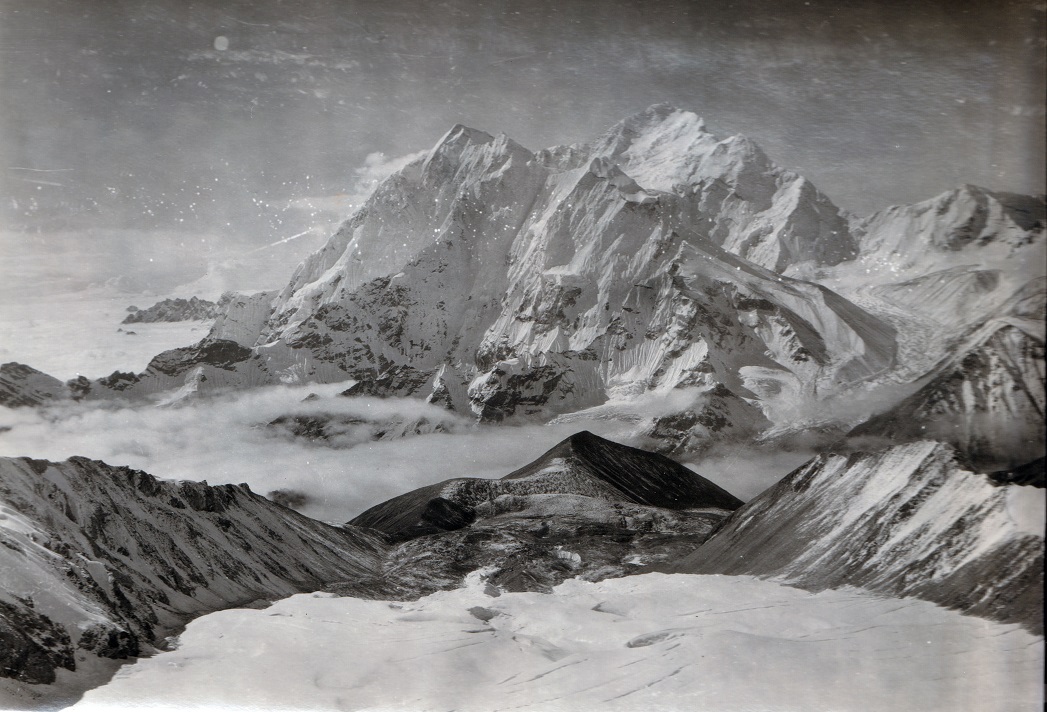 A view of Makalu and Chomolönzo, about 20 kilometres south-east of Everest, taken during the 1921 reconnaissance. In his account of the expedition, Charles Howard-Bury described seeing the those peaks for the first time: 'As soon as I had finished breakfast I climbed up 1,000 feet behind the camp; opposite me were the wonderful white cliffs of Chomolönzo and Makalu, which dropped almost sheer for 11,000 feet into the valley below. Close at hand were precipices of black rock on which, in the dark hollows, nestled a few dirty glaciers.' (Marian Keaney/Westmeath Library Services: Howard-Bury Collection) 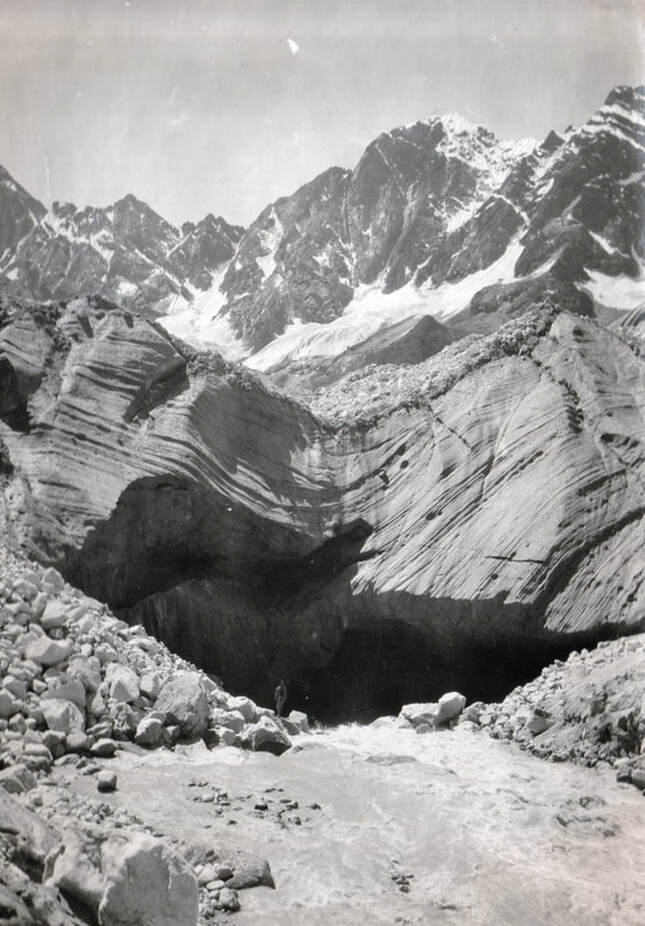 An epic Landscape. A member of the reconnaissance team can be seen standing by the river. (Marian Keaney/Westmeath Library Services: Howard-Bury Collection)