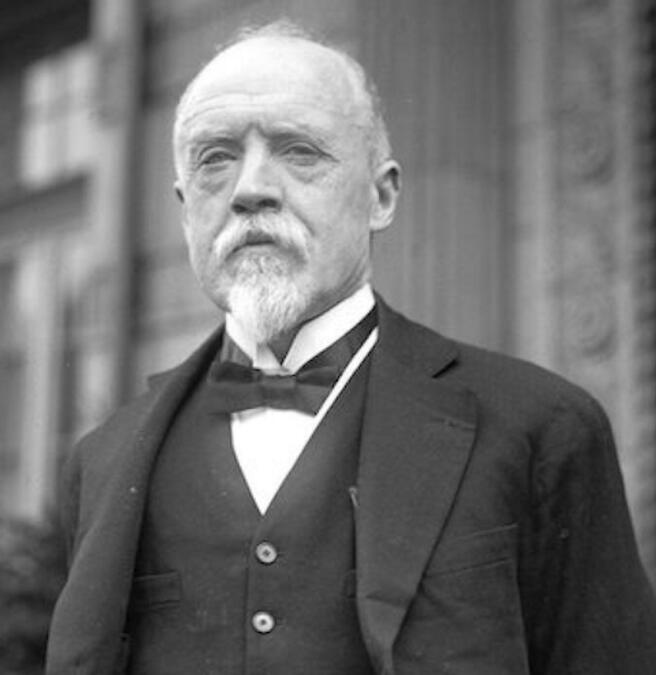 Laurence Ginnell in the United States in January 1923. Photo: US Library of Congress

In one of the sitting TDs for Longford-Westmeath, Laurence Ginnell, anti-Treaty republicans had a powerful propagandist in their camp after the outbreak of civil war. A veteran of the Irish Press Agency, the publicity arm of Irish nationalists in Britain set up during the late 1880s, Ginnell put his experience to work in generating publicity for his Ranch War (1907-9), the last organised agrarian agitation in Ireland prior to the establishment of the state. After breaking with the Irish Parliamentary Party, Ginnell took on the mantle of a standalone dissenting nationalist in the House of Commons, agitating against British policy in Ireland and beyond – most notably during the First World War and in the aftermath of the 1916 rising. Many of Ginnell’s propaganda ploys were intensely personalised, with the result that he was able to portray himself, up until 1917 at least, as one man standing alone against an empire trying to silence or imprison him. It was an effective strategy which earned him widespread sympathy and notoriety around the world. He put it to good use during the 1917 Irish by-elections – particularly in North Roscommon – and maintained it while imprisoned in 1918. His appointment as the First Dáil’s director of propaganda was no surprise, and when posted abroad to represent the Dáil in Chicago and Buenos Aires, publicising the cause of Irish independence on the world stage was at the heart of his activities.

Ginnell opposed the Anglo-Irish Treaty and campaigned against it, and when the cleft between former comrades became so pronounced as to result in civil war, he became one of the anti-Treaty side’s foremost propagandists. In the aftermath of the Provisional Government’s attack on the Four Courts, he wrote a pamphlet in reply to queries from a constituent entitled Where lies the blame?, a copy of which can be read in the Ginnell papers in the local studies section of Mullingar Library. In this polemic, he lays out in plain terms his belief that in the wake of the June 1922 election, the country had ‘allowed a section of [Dáil] deputies, calling themselves a Government, without waiting to be appointed as such, and without consulting the assembly the people had elected, to give it Civil War instead’. In September, he was chosen by Éamon de Valera as the anti-Treaty TD best equipped to enter what they called the ‘Provisional Parliament’ in order to obstruct proceedings; he was duly expelled from the chamber for doing so on 9 September, becoming the first person to be ejected from both a British and Irish parliament. Later that month, he wrote to the Archbishop of Dublin charging the Provisional Government’s Criminal Investigation Department (CID) with carrying out extra-judicial murders in the archdiocese.

Ginnell’s propaganda was zealous and partisan, and some of his republican colleagues, who wished to convince their Treatyite opponents as opposed to demonising them, often had to rein him in. They disagreed, for example, with Ginnell’s repeated statements about there being a civil war in Ireland; the prevailing conceit among the anti-Treatyites was that what was happening in Ireland was a continuation of the war with Britain, rather than a war between Irishmen. As late as October 1922, Ginnell wrote to his wife Alice:

Everyone complains that we have no propaganda. The gentleman in charge of it [Patrick Little] asked me three weeks ago to write a leaflet for him. I did so, and handed it to him the next time I went in. Now, after more than a fortnight, he returns it to me, with a request to tone it down.

Historian Nikolaus Braun has argued that the sort of robust propaganda favoured by Ginnell earned him the ‘respect and envy’ of hardcore republicans like Mary MacSwiney. It was also the sort of material lapped up by audiences in the United States, and this was partly the reason why in November, de Valera elected to send him to America to represent the anti-Treatyites.

A study in propaganda: the July 1922 robbery from Ginnell

One incident which typified Ginnell’s approach to propaganda occurred in the days after the Provisional Government concluded street battles with the anti-Treatyites in Dublin. As a result of his prison stints, Ginnell was diagnosed with arteriosclerosis and neurasthenia, and late into his Dáil mission in Argentina his health deteriorated considerably. Before he left for the US in December 1922, much of his time back in Ireland was spent in a nursing home, Kilbride Villa in Bray, Co. Wicklow, run by a Miss Mary Chisholm and a team of nurses.

On 7 July 1922, an armed man entered Ginnell’s lodgings and stole £60, and claiming he was sent by a National Army officer, a Captain Michael Doran, said he had orders to ‘shoot everyone in the house’, including Ginnell. He then returned to the house two days later and broke a number of windows. Two men, including Daniel Devlin – formerly a soldier in the British Army – were subsequently arrested by Captain Doran, and Devlin appeared at a circuit court sitting in Bray on 27 July.

Before the court sitting, Ginnell attempted to extract propaganda value from the events of 7 July by aggressively pursuing various lines of enquiry about Devlin. He wrote to Michael Collins, chairman of the Provisional Government, demanding ‘effective protection’ from his government and a refund of the £60, charging that he had been robbed and threatened by a solder in the National Army. When Collins investigated the incident further, he concluded that ‘neither of the men [arrested] have any connection whatsoever with our forces’. However, in an account for the Bureau of Military History, Alice Ginnell recalled that the Ginnells were subsequently contacted by Captain Doran, who informed them that the suspects had joined the National Army three days before the incident and were acting on intelligence that Éamon de Valera and his chaplain, Fr Dominic O’Connor, were in hiding at Kilbride Villa.

At the initial court sitting, Ginnell propagandised in a manner similar to the tactics he adopted when appearing before British courts. He questioned the authority of the court, demanding to know if it was a republican body. When the presiding officer told him it was, and one functioning under Dáil Éireann, he alleged that the solicitor prosecuting Devlin on behalf of the Provisional Government ‘was there to shield that robber’. Giving evidence, Ginnell claimed that Devlin told him during the robbery that he was ‘here on behalf of the Free State Army, and have orders to shoot all Republicans, including you’.

In response, the state solicitor accused Ginnell of trying to ‘sling mud’, while Captain Doran – contrary to Alice Ginnell’s later claims – said that Devlin had ‘offered his services to the general reserve, but his services were not accepted’. He was never in the National Army, and acted under no authority, th

Devlin was duly sent forward for trial at Bray Circuit Court on 2 November, by which time Michael Collins, who had ordered the initial investigation, was dead. At the hearing, it emerged that Devlin was a former soldier of the Royal Dublin Fusiliers. Ginnell continued to push the line that a political conspiracy was afoot, and claimed that in the time between the two court sittings, he had received a threatening letter connected to his appearance as a witness. However, the case was adjourned again, and any attempt to generate a furore fizzled out. Ginnell left for America, where he died in April 1923.

Days before Ginnell’s death, Devlin was convicted and sentenced to six months imprisonment with hard labour; but the presiding judge, showing ‘mercy on the grounds of his youth’, backdated the sentence to November, and Devlin was free to go.