Censorship and violence against newspapers

During the Irish Civil War, controlling the flow and content of information was a primary goal for the combatants. It was a time when newspaper offices were burned to the ground, when censorship prevented certain reports from appearing in the press and when propaganda battles were fought between the opposing sides. 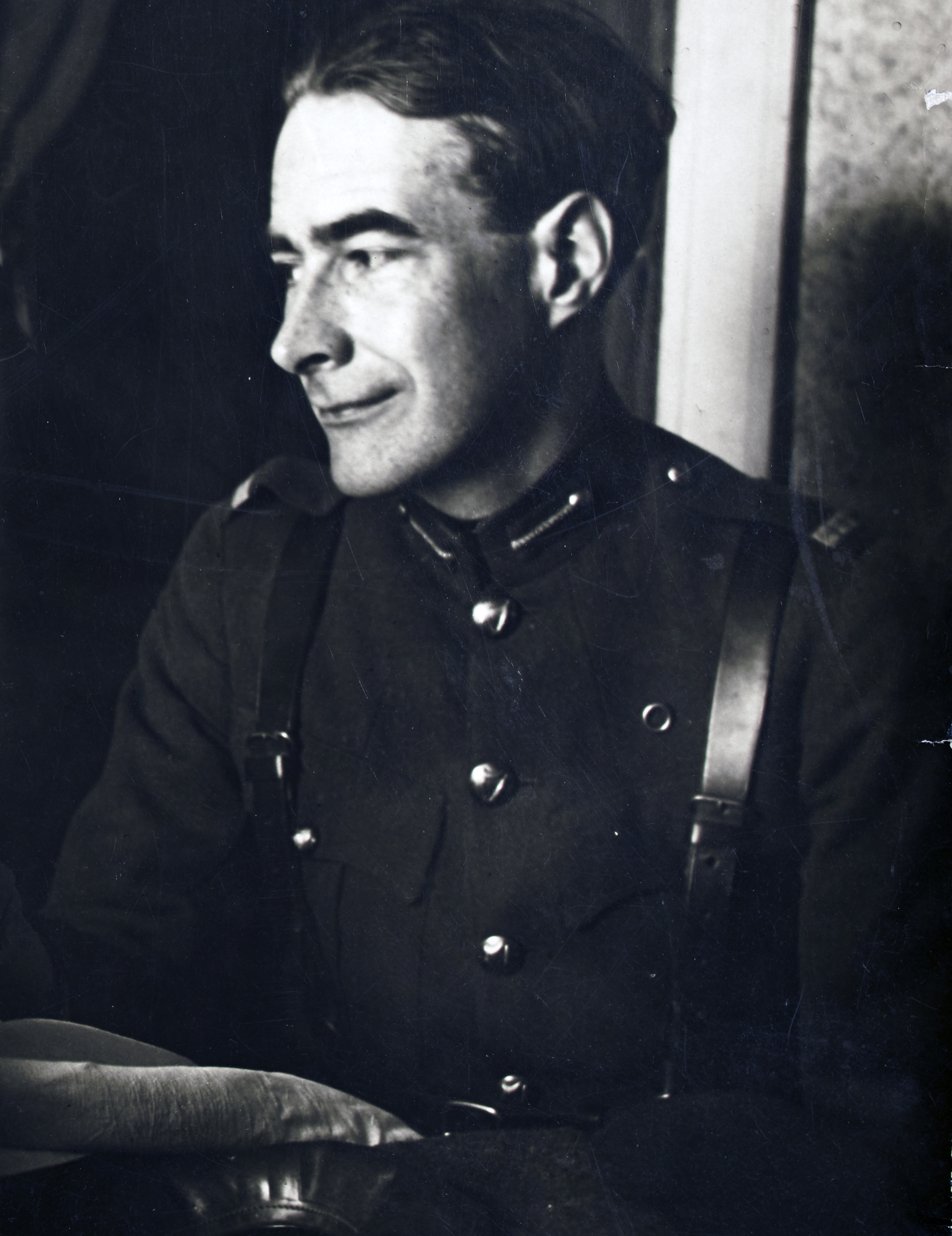 At the outbreak of the war, the Provisional Government introduced military censorship of the newspaper press with the following order: ‘…no newspaper or publication shall be permitted to be imported, distributed, published, or sold in the area of the jurisdiction of the Provisional Government which, or the contents of which, have not been submitted to the Official Censors of the National Army, and passed by them for publication’.

The censorship structure shared many similarities to the censorship regime put in place by Dublin Castle following the 1916 Rising and which was discussed in a previous edition of the blog. However, the Provisional Government did not merely institute censorship but it also provided the press with guidelines on the use of language and its general behaviour. One example was the use of the term ‘Irregular’. That was the favoured government term for the anti-Treaty forces and it made its way into post-war histories as a description for anti-treaty activity.

The use of the term ‘Irregular’ was first ordered by the Provisional Government at the beginning of the conflict in a document which the newly appointed Chief Military Censor, Piaras Béaslaí, sent to newspaper editors across the country. That document provided the procedures under which the press would be allowed to conduct its work. Amid its rules, there were restrictions on the information that could be published concerning troop movements, army logistics, recruitment of troops to the National Army, descriptions of military operations and the escape of anti-Treaty IRA prisoners. The other sections of the order governed how the press was to report on the anti-Treaty forces and the terminology that should accompany those reports. The order stated that the ‘Army must always be referred to as the “Irish Army”, “The National Army”, “National Forces”, “National Troops” or simply “The Troops”. On the other hand, the order stated that the ‘Irregulars must not be referred to as “Executive Forces” nor described as “Forces” or “Troops”. They are to be called “Bandits” or “Bodies” or “Armed Men”. As can be seen in those instructions it was terminology which was of utmost concern to the government. Any description which suggested that the struggle was between two equally legitimate forces was to be prevented. 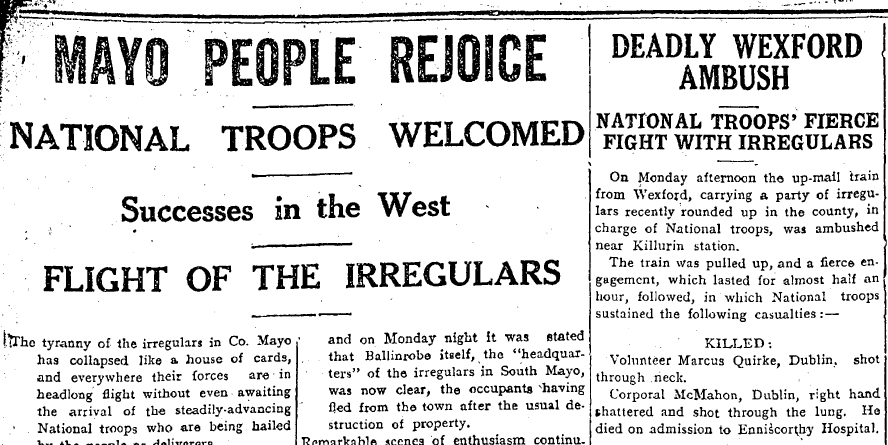 Yet members of the Provisional Government were mindful from the beginning of the conflict that there was a danger in censoring the press. The policy allowed easy comparisons between the actions of the government and British administrations in Ireland, especially those during 1916-21. It also threatened to make the public suspicious of reports in the press. Bearing in mind that the press was mostly supportive of the Treaty and of the government, aggressive censorship may have proved counter-productive. In July 1922, Desmond Fitzgerald advised Michael Collins that the censorship should be relaxed ‘almost to vanishing point’. It was an argument with which Collins agreed. In a sign of how the Provisional Government was confident that it had the majority of the press on its side, Collins wrote to Richard Mulcahy a day later advocating reliance on the public spirit of the press claiming that: ‘At all times the censorship was too strict for my liking.’

Collins advocated a censorship model that relied on the pro-Treaty sentiments common to nearly all national and regional newspapers, writing to Fitzgerald near the end of July 1922: ‘If there are some rare instances of departure from the spirit in which we allow freedom to the press, then I think we should take such cases up separately.’ That ad hoc style of censorship was in place by the time of Collins death in late August 1922 but it proved to be an unworkable system. By September 1922, at least some newspaper editors had concluded that the Provisional Government was removing the censorship but they soon learned otherwise. Towards the end of that month, the Irish Times complained: ‘It appears, however, that a sort of censorship, which we know not whether to describe as military or civil, still exists.’

The Irish Times also stated that it had recently received orders from the military censor to omit material from reports. During the conflict, newspapers were prevented from fully reporting on many incidents, including those involving acts of violence carried out by the forces of the Provisional Government. We discussed one such example in an earlier edition of the blog, the case of Patrick Mulrennan in Athlone. Similar occurrences had led the Irish Times to state: ‘The Government ought to abolish the present system of half-censorship without further delay. If newspaper reports suggest the need of official inquiry or defence, the Censor’s pencil ought not to usurp the functions of Parliament.’

Between 1922 and 1923 both sides of the Treaty divide sought to silence publications that were deemed to be supportive of the enemy. The Provisional Government had the power to censor and suppress newspapers, while officers in the National Army are known to have threatened newspaper editors on various occasions. The anti-Treaty IRA lacked the legislative means by which to censor newspapers but they were adept in deploying direct intimidation. The most well-known of example of such intimidation was the anti-Treaty IRA attack on the offices of the Freeman’s Journal in March 1922. Around 450 people were left unemployed after the attack during which the printing machinery was destroyed and the building burned out. On the day after the attack, the Freeman’s Journal printed as a single-sheet poster denouncing the anti-Treaty IRA. The paper, after receiving financial support from the Provisional Government, was able to resume full production a few weeks later.

The uproar that followed the Freeman’s violent suppression did not cause the anti-Treaty IRA to hold back from using intimidation against newspapers. In April 1922, it attacked the offices of the Sligo Champion, a pro-Treaty paper which had compared the choice to support or reject the Treaty as a choice between ‘Government or Anarchy’. The paper was preparing its next edition when a group of armed men held-up the staff and destroyed ‘about ten thousand partly-printed copies of the issue’.

As in the case of the Freeman’s Journal, the Sligo Champion published its next edition in the form of a poster. This poster, signed by the owner Alfred McHugh, gave a brief account of attack on its premises under the headline: ‘Irish Black & Tans Raid the “Sligo Champion”’.  The poster also contained the leader article that was to have appeared in the edition destroyed by the anti-Treaty IRA. The attack was widely covered across the press and, during the following weeks, some newspapers, such as the Donegal News, Freeman’s Journal and Ulster Herald, reported the story under the headline: ‘The War on Newspapers’. 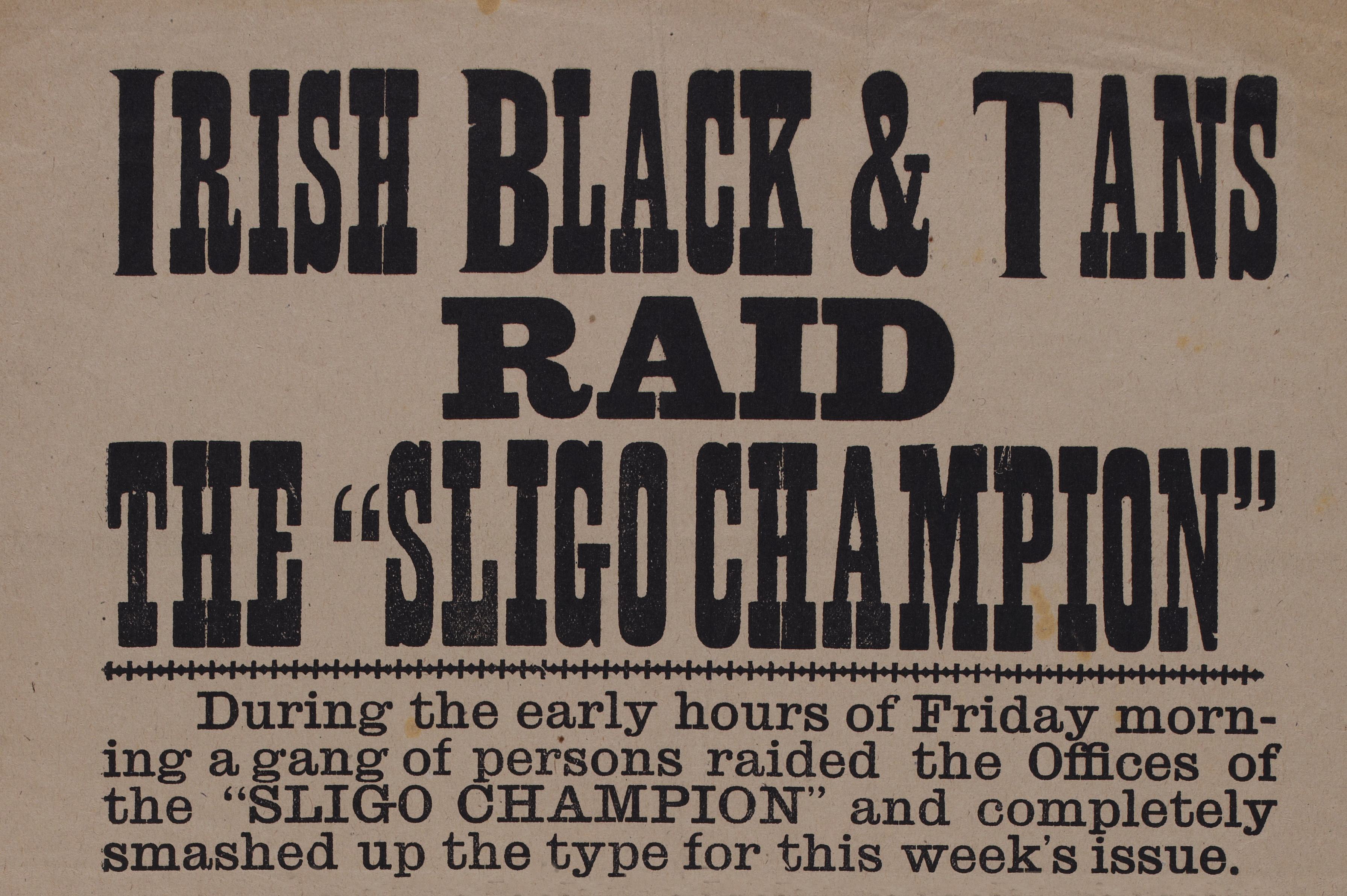 Image: Section of a poster printed by the Sligo Champion after an attack on its offices by the anti-Treaty IRA (National Library of Ireland)

This ‘war’ did not always take the form of spectacular attacks on newspaper offices. Individual journalists remained vulnerable to attack. For example, the Roscommon Herald’s J.S. O’Donnell was kidnapped by the anti-Treaty IRA in September 1922 near Ballaghaderreen. O’Donnell’s notebooks were taken from him and he was released with the warning that he would be executed if he returned to the area. Other sections of the newspaper trade were also targeted. In Clonmel, local newsagents were ordered not to stock either of The Nationalist or the Clonmel Chronicle. Threatening newsagents may have been a common tactic by the anti-Treaty IRA since it could, with little risk, prevent or diminish newspaper sales in a particular area. Another tactic was to seize bulk stock of newspapers as they were transported throughout the country each day, a fate that was common for the Freeman’s Journal and Irish Independent.

Nationally, the Freeman’s Journal and the Irish Independent remained the prime targets, although, as the war progressed, intimidation was directed at individuals rather than their institutions. On 25 November, two men called to the home of the editor of the Irish Independent and told his wife that he was ordered by the ‘Republican Army’ to quit the country by 8 pm or ‘be shot at sight’. Since then, the editor had taken to living and sleeping in his office only occasionally, according to colleagues, stepping out for ‘a quick breath of fresh air’. Those threats were the precursor to an escalation of the anti-Treaty campaign against newspapers during 1923 in what would be another violent year for the press.