A Shooting in Custume Barracks

In this article, we discuss the circumstances surrounding the fatal shooting of Patrick Mulrennan in October 1922. Mulrennan was then a prisoner in Athlone’s Custume Barracks. 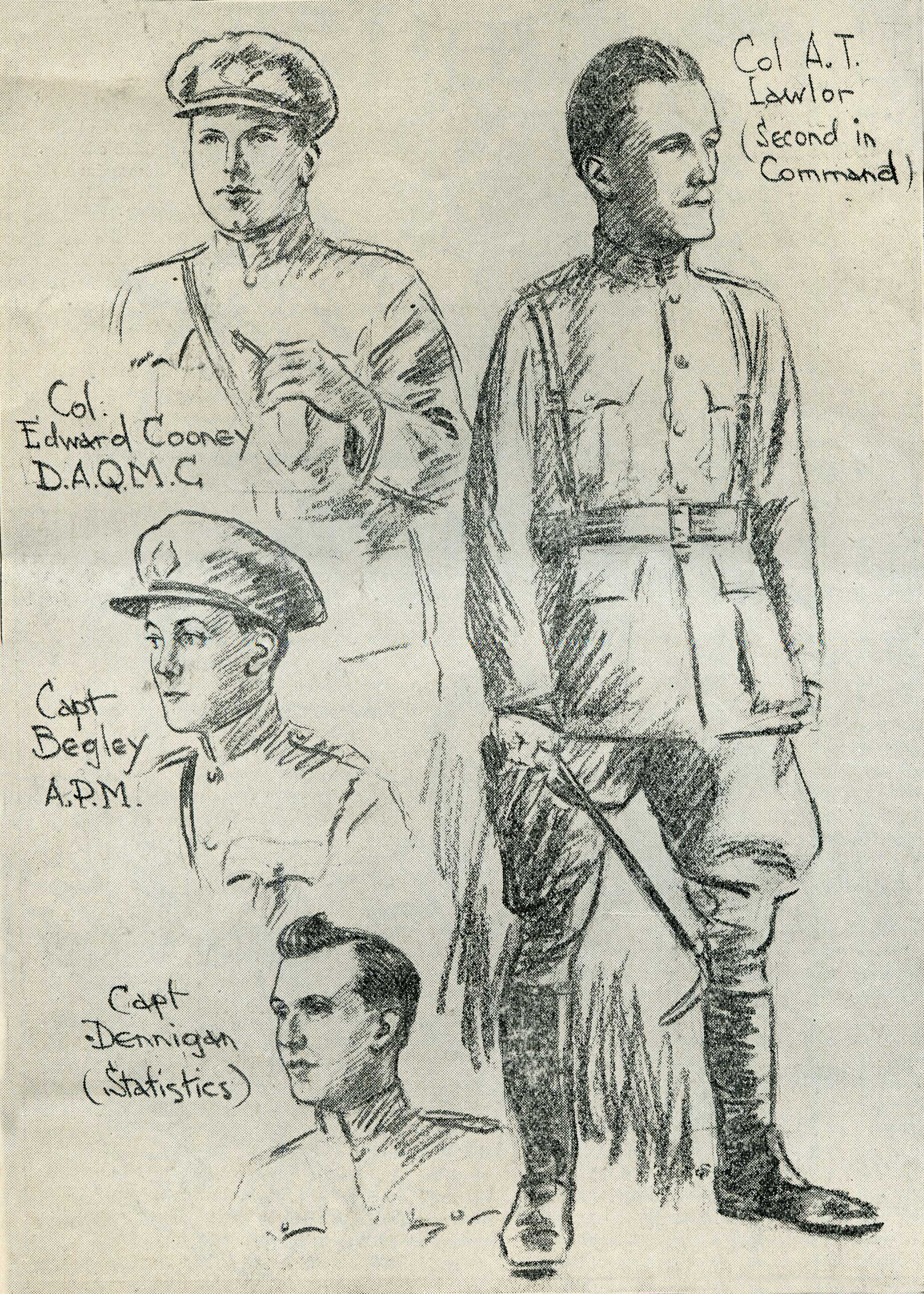 Caption: ‘A Sketch of Anthony Lawlor and fellow-officers in Custume Barracks, published during April 1923 in An t-Óglach, which was then a National Army publication.’

During the Irish Civil War, Custume Barracks served both as a headquarters for the Provisional Government’s National Army and as a vast prison for captured members of the anti-Treaty IRA. Although Custume Barracks briefly housed prisoners in April 1922 following the shooting dead of George Adamson, it was not until the summer of 1922 that the barracks began to receive large numbers of captured anti-Treaty soldiers.

The barracks, although it had also served as a prison during the War of Independence, was not designed for that purpose. As the number of prisoners rose, their conditions declined: for example, they were crowded into small cells in which there was not enough room for all the occupants to lie down at the same time. Yet, as the Civil War raged, new prisoners kept arriving, for which the army constructed a series of cages. Apart from such unsatisfactory and, according to contemporary accounts, highly unsanitary accommodation, the prisoners complained regularly about low quality food, or even lack of food, and mistreatment by their guards. Prisoners rioted in protest against their conditions and there were many escape attempts: either through tunnels or through scaling the walls with ropes made from bed-sheets.

By October 1922, according to a contemporary statement by Seán MacEoin, commander of National Army forces in the midlands and the west, Custume Barracks held nine hundred and fifty prisoners. That month, one of those prisoners died at the hands of his captors. His name was Patrick Mulrennan, a member of the anti-Treaty IRA and veteran of the War of Independence from Lisacul in County Roscommon.

On 6 October 1922, Mulrennan was shot and fatally wounded. According to accounts that appeared in anti-Treaty publications such as ‘Freedom’, among others, Mulrennan was killed during an inspection of the prisoners by National Army troops led by Seán MacEoin. One account, by a prisoner named Peter Shortall, claimed that an officer with MacEoin, fired into a group of prisoners, hitting Mulrennan. Shortall’s account continued: ‘As he was about to fall he called out, “I’m shot”,and grasped one of his comrades by the shoulders pointing to his side where the bullet hit; on raising up his coat blood was oozing through his shirt.’ Mulrennan lay on the ground while fellow prisoners, including a doctor named Francis Ferran, attempted to render first aid. According to Shortall’s account: ‘The poor lad was lying in the yard, not able to utter a word, his blood gushing freely from his wound onto the ground.’ As Mulrennan lay bleeding, MacEoin and the officer who had fired the shot ‘came along and stood over him’. Shortall claimed that MacEoin then pressed his fingers on Mulrennan’s wound and said to the watching prisoners: ‘By God, some more of ye would need it too’. Mulrennan was taken to military hospital but died of his wounds four weeks later.

Another version, although one that also culminated with Mulrennan’s death by gunfire, was provided to me by a retired colonel of the Irish defence forces, Éibhear O’Hanlon. During the 1980s, O’Hanlon gave a tour of Custume Barracks to John Snee, a former member of the anti-Treaty IRA who was imprisoned there in 1922. Snee described to O’Hanlon his recollection of Mulrennan’s shooting. In Snee’s account, soldiers made a snap inspection of the prisoners, who were corralled into an area of the barracks called Pump Square. Mulrennan was on the upper floor of one of the surrounding buildings and, as he made his way down the stairs, was driven forward by the mass of prisoners who pushed him in the direction of MacEoin. An officer with MacEoin, apparently acting in the belief that the prisoners were rushing at his commander, raised a revolver and shot Mulrennan.

Shortall’s account differs in detail from Snee’s account, as relayed by O’Hanlon. Also, there is no evidence for, or against, Shortall’s account of MacEoin’s supposed treatment of Mulrennan after the shooting. More importantly, however, both accounts match in describing an army officer using a revolver to shoot the unarmed Mulrennan during a prisoner inspection. That officer was Anthony Lawlor, a senior member of Seán MacEoin’s command. MacEoin later defended Lawlor before an inquest at the Curragh, saying that the officer had first fired a warning shot before ‘hitting the deceased’. The official stance on the incident was relayed in Dáil Éireann by Éamonn Duggan, a government minister, who stated: ‘Owing to mutinous conduct of the prisoners it became necessary, in the last resort, after due warning given fourteen days previously on special parade, to fire on them.’

In this case, we can see the effects of the censorship regime in place at the time. Although the overwhelming majority of the press, both national and regional, supported the Anglo-Irish Treaty, the Provisional Government still felt it necessary to censor newspaper content, especially in cases where government forces were culpable. The death of Mulrennan would likely have remained a local and overlooked event except for the publication by the anti-Treaty IRA of an extraordinary letter from Lawlor to his mother. In this letter, which the anti-Treaty IRA claimed to have intercepted shortly after the shooting, Lawlor boasted of his marksmanship stating that he had taken ‘a wonderful shot’: although little skill is required to shoot a defenceless prisoner. Lawlor’s letter also contained the chilling line that: ‘I don’t believe in shooting as wholesale medicine but a little is very useful’. Its usefulness had been confirmed in his eyes by the fact that the prisoners in Custume Barracks, he claimed, became markedly quieter following the shooting of Mulrennan.

It seems there was no official sanction against Lawlor, although the affair remained a source of public controversy after the Civil War. In 1928, Mulrennan’s death was discussed in Dáil Éireann during a debate between Patrick Joseph O’Dowd, Fianna Fáil TD for Roscommon and Desmond Fitzgerald, at that time Cumann na nGaedheal TD for Carlow-Kilkenny and Minister for Defence. Fitzgerald refused both O’Dowd’s request for an official inquiry into Mulrennan’s death and a request that compensation be provided to Mulrennan’s mother. In a separate debate with O’Dowd, Fitzgerald repeated earlier claims that the shooting of Mulrennan had taken place amid efforts to quell dissent among the prisoners: ‘I understand that there was a state of mutiny there - a state of active mutiny - and that this man and others were warned that unless they behaved themselves they would be shot.’

That remained the official line, although as historian Patrick Murray, in his study of the Catholic Church and Irish politics during the Civil War and after, has concluded: ‘There is compelling evidence, however, that many members of the armed forces of the state were involved not only in major infractions of the rules of war, but in all forms of criminal activity against civilians.’ The fatal shooting of Patrick Mulrennan was one such infraction of the rules of war.