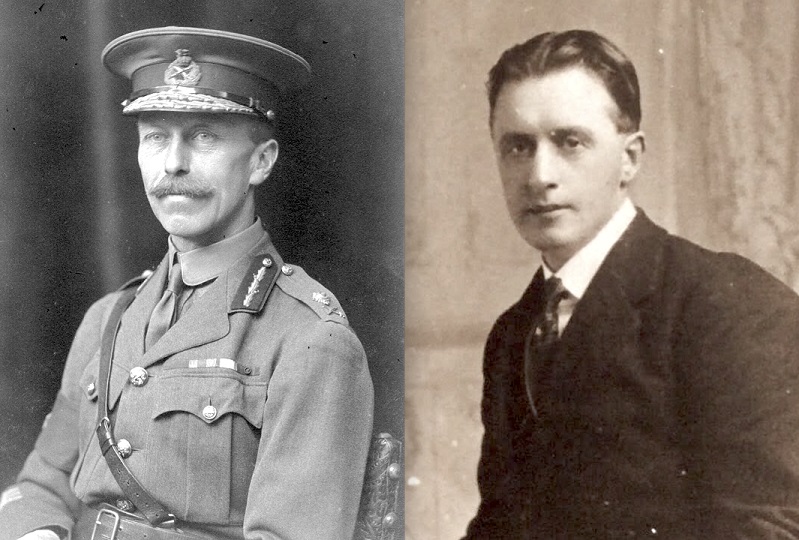 Left: Colonel-Commandant Thomas Stanton Lambert, who served as officer commanding the 13th Infantry Brigade in Athlone from 1919 to his death in June 1921 (photo: UK National Portrait Gallery). Right: John J. Elliott, captain of the IRA’s Tubberclair Company, who organised the ambush in which Lambert was killed on 20 June 1921 (photo with thanks to Imelda Elliott and the Elliott family).

‌The only serving British soldier killed by the I.R.A. in Westmeath during the War of Independence died one hundred years ago this week, when on Monday, 20 June 1921, the commanding officer of the Athlone-based 13th Infantry Brigade was shot dead by the IRA in an ambush at Benown, Glasson, not far from the shores of Lough Ree.

Colonel-Commandent Thomas Stanton Lambert was travelling past the gates of Harmony Hall, Benown, when members of the Irish Republican Army’s Tubberclair Company carried out the ambush. Lambert died later that evening, sparking a cycle of violence in the greater Athlone and South Roscommon areas over the course of the ensuing fortnight.

The son of Richard Lambert, a Church of England vicar, Lambert was baptised in Walthamstow, Essex on 10 March 1871. He grew up in Bradford-on-Avon, Wiltshire, and after graduating from the Royal Military Academy at Sandhurst in 1871, he received a commission as a lieutenant in the East Lancashire Regiment, before shipping out to India.

In 1900, Lambert married Geraldine Foster in the western Indian province of Jammu and Kashmir. They had four children, two of whom survived. By 1911, the Lamberts were back in London, living in Earl’s Court, by which time Lambert held the rank of captain. He was promoted to major shortly before the outbreak of the First World War in 1914.

When Britain declared war on the Central Powers in August of that year, Lambert was assigned to the War Office where he held the position of Deputy Assistant Adjutant General. A month later, he was sent to France to command his old unit, the East Lancs, after its OC was killed in action. He was severely wounded some weeks later, when a gunshot to the chest permanently disabled one of his lungs.

Lambert returned to active service in 1915 and held a number of key staff positions, rising through the ranks before being appointed General Officer Commanding the 69th Infantry Brigade in March 1916. Breveted to the rank of brigadier-general, he was at the helm of several major Allied actions and in France and Italy.

In May 1918, in the aftermath of the German Spring Offensive, he received a further promotion when appointed commanding officer of the 32nd Division on the Western Front, with the temporary rank of major-general. He led the division through the Hundred Days Offensive and the final engagements of the war.

In the summer of 1919, as the political situation in Ireland deteriorated, Lambert was posted to Victoria Barracks, Athlone as OC of the 13th Infantry Brigade, taking up residence at Abbey House on the Coosan road. He held the rank of brigadier-general until early in 1921, when British military chiefs decided to abolish it and replace it with that of colonel-commandant. The 13th Brigade held sway in a vast portion of the midlands and west of Ireland, including the whole of Co. Westmeath.

Westmeath remained relatively peaceful until the spring of 1920, when the IRA began to attack vacant and occupied police barracks across south Westmeath. In June, the republicans shot an RIC sergeant, Thomas Craddock, outside the Soldiers’ Club in Athlone and had plans to kill one of Lambert’s subordinates, the brigade intelligence officer Captain C. L. D. Tully. However, Lambert moved quickly and invoked the Restoration of Ireland Act in his jurisdiction, imposing strict curfews and forcing IRA guerrillas to go on the run.

It was at this point that the IRA’s Athlone Brigade formed an active service unit – a ‘flying column’ of twelve to fifteen full-time, armed guerrillas who moved around the south Westmeath area looking for ambush opportunities, and living on the good will and nourishment provided by households who sympathised with the republican movement. The effect of the flying column was strongly felt in October, when they sniped at a party of military patrolling Lough Ree on 17 October, before ambushing a convoy of Crown forces at Parkwood (between Moate and Clara) five days later, killing a constable.

Another Crown fatality followed at Glasson on 2 November, when one Constable Sydney Larkin was shot dead at Auburn, Glasson. This marked the end of the flying column’s run of success in south Westmeath, as Lambert’s approach to combatting the rebels began to bed in. Arrests and tighter curfews followed the Glasson ambush.

In nearby Tubberclair, IRA captain John J. Elliott was forced to go on the run after his likeness appeared in the police gazette, ‘Hue and Cry’. However, he and his men succeeded in avoiding arrest and remained active until the end of the guerrilla campaign.

Elliott (b. 1877) was the son of a local farmer, Peter Elliott of Tonagh House, Tubberclair. His younger sisters, Emily and Eilís, were founding members of Cumann na mBan who saw active service during the 1916 rising (in 2018 a road in Athlone was named ‘Elliott Road’ in honour of the sisters and their family’s record of national service).

Elliott joined the Irish Volunteers in 1917, while war continued in Europe and then Brigadier-General Thomas Stanton Lambert, whose demise Elliott would mastermind just four years later, was establishing his bona fides as a military leader in the fields of France and Belgium.

John J. Elliott and Thomas Stanton Lambert crossed paths at Benown on 20 June 1921. The IRA, through local intelligence, learned that Lambert and his wife were regular visitors to Killinure House at Glasson, overlooking the shores of Lough Ree. Killinure was home to the Metges, a Protestant family whose patriarch, Peter Metge, was listed in the 1911 census as a civil engineer and farmer.

The Lamberts had joined the Metges for refreshments and an afternoon of tennis at Killinure on 20 June. Joining them was a subordinate of Lambert’s, Lt-Col E. L. Challenor, the officer commanding 1st Battalion of the Leicestershire Regiment, which alongside the 13th Brigade headquarters, was based at the military barracks in Athlone. Challenor was accompanied by his wife and niece.

According to senior Athlone Brigade IRA officer Thomas Costello, Elliott’s orders were not to shoot Lambert on sight, but to ‘round up’ any officers leaving Metge’s and disarm them. Another account suggests that the plan was to hold Lambert and Challenor hostage as leverage with which to secure the release of Longford guerrilla leader Seán Mac Eoin, who had been captured in Mullingar on 2 March and was facing the death penalty for his activities.

When Lambert and his party left Killinure at around 6.30pm on the evening of 20 June, Elliott positioned a handful of his men along the road outside the gates of a nearby mansion, Harmony Hall (Benown), and the rest of his troops further down the road. He chose not to put a temporary road block in place, instead beckoning the car to stop at Harmony Hall.

Geraldine Lambert, who was driving the car, accelerated through Elliott’s checkpoint and drove on. Further down the road, the vehicle ran into a hail of IRA bullets. Lambert turned to use his sidearm and was shot in the neck, while Lt-Col Challenor’s wife was wounded in the face by shotgun pellets. Mrs Lambert kept driving until clear of the ambush. Her husband was then taken to hospital, where he died a couple of hours later.

The shooting of Lambert was a rare bullseye for the IRA in south Westmeath since the high-impact actions of October/November 1920. Lambert’s crackdown, which began in the wake of the Craddock killing, led to several arrests being effected, including that of Joseph Tormey, who was later shot by a sentry at Ballykinlar Internment Camp in Co. Down in early January 1921. His brother James, the active service unit commandant who led the Parkwood ambush, was killed in an engagement with Crown forces at Cornafulla some weeks later.

Official reprisals did not appear to be part of Lambert’s modus operandi as an officer, but the status quo changed after his death. In the days which followed the shooting, the Black and Tans and members of the RIC’s Auxiliary Division – acting on questionable intelligence that Lambert’s assassins had crossed Lough Ree and gone into hiding in Roscommon – entered Knockcroghery and set fire to a significant portion of the village.

They also burned a number of houses in the Coosan area. ‘They acted very callously in doing so,’ Thomas Costello told the Bureau of Military History, ‘not even allowing the inhabitants to get dressed when they took them out of their beds, or to collect any of their belongings.’ The spiral of violence continued on 3 July, when the IRA responded to the burnings in Knockcroghery and Coosan by setting fire to Moydrum Castle, the seat of the lord lieutenant of Westmeath, Lord Castlemaine. Eight days later, the guerrilla war came to an end with the agreement of a truce between the IRA and Crown forces.

A tale of two soldiers

Colonel-Commandant Lambert’s body was transported to England, and he was laid to rest at Brookwood Cemetery in Surrey. Newspaper reports at the time revealed that he left a substantial estate of £70,155 to his wife and family – in today’s money, a fortune of just over £3.5 million. R. R. Money, who worked under Lambert as an assistant brigade intelligence officer in Athlone, described the dead officer as ‘another brave soldier and honest kindly gentleman... sacrificed on the blood-stained altar of Irish misrule’.

Meanwhile, John J. Elliott continued to serve the IRA beyond the Truce in his capacity as Athlone Brigade police officer, which he fulfilled alongside his duties as captain of the Tubberclair Company.

Supporting the Anglo-Irish Treaty, he later told the Army Pensions Board that he was one of only a few officers in the Athlone Brigade to support the London agreement. From March to September 1922, Elliott was appointed to a civilian intelligence role with the National Army for which he was paid £4.10.0. His completion of these duties was contemporaneous to the end of the conventional phase of the civil war. Elliott’s home in Tubberclair was shot at by anti-Treaty forces in December 1922.

Following an appeal, Elliott was granted a £100 wound gratuity and just over three years’ service for pension purposes by the Army Pensions Board. He died in 1949, seventeen years after the death of his wife Molly (née Carty).