In the previous article, we followed Alice and Laurence Ginnell’s activities between December 1921 and July 1922. Our main source was Alice Ginnell’s witness statement to the Bureau of Military History which was compiled form her diaries as well those belonging to her husband. The couple returned to Ireland in April 1922 from Argentina, where they had been assigned by Dáil Éireann to advocate on behalf of the Irish republic. Laurence Ginnell subsequently won a seat in the June 1922 general election (as discussed in this article) as an anti-Treaty Sinn Féin candidate. Alice acted as his election agent and the couple continued to work together while the country experienced the ravages of civil war. 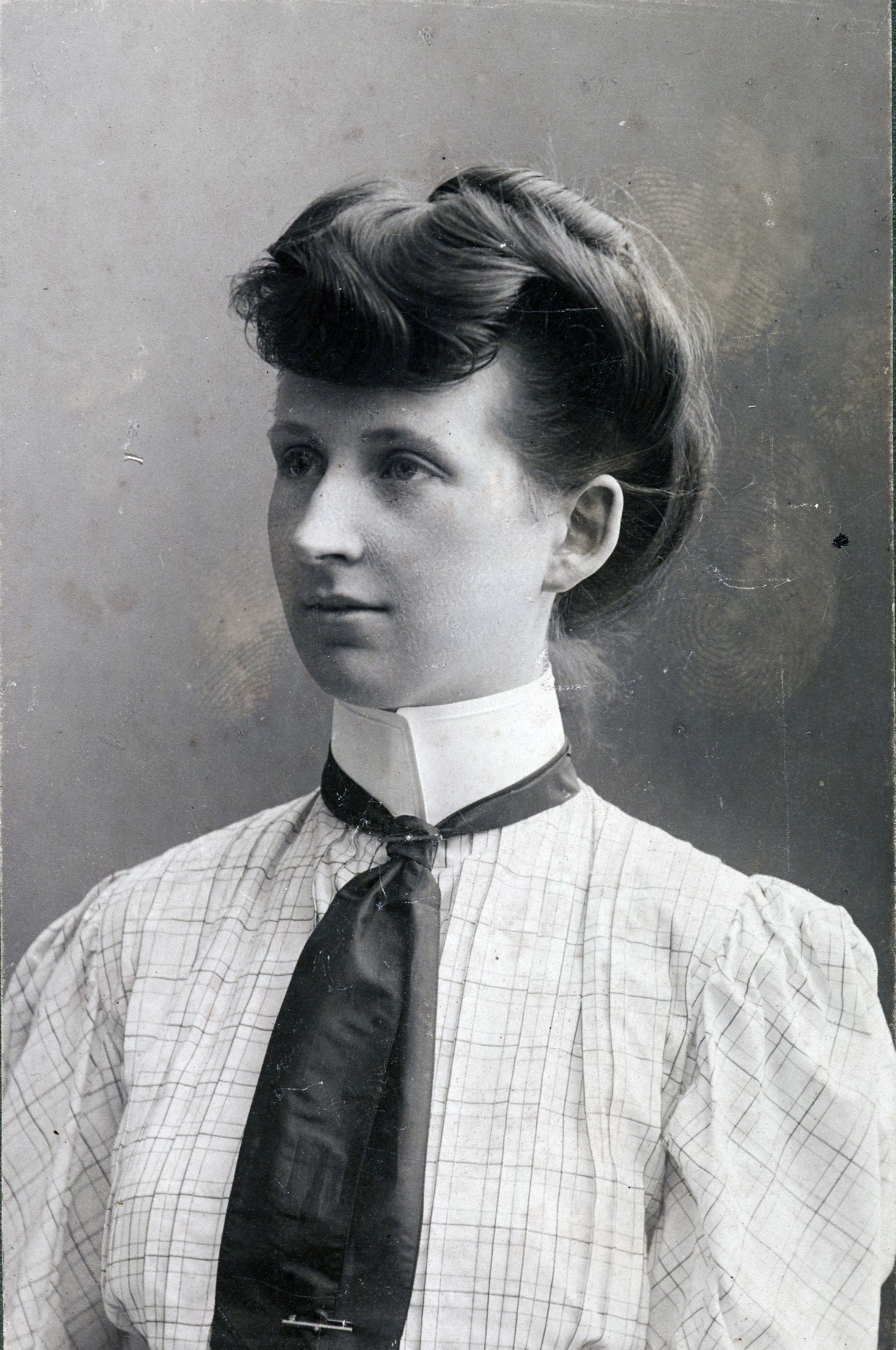 Photo: A photo from the Laurence Ginnell Collection in the National Library of Ireland. The library describes the image as a 'Portrait photograph of a young woman, possibly Alice Ginnell'. If it is Alice Ginnell, it may date from around 1902 when she married Laurence Ginnell.

As the conflict intensified, well-known figures such as Cathal Brugha were killed. Like the Ginnells, Brugha opposed the Treaty and he joined the fighting that took place in Dublin after the shelling of the Four Courts (discussed in this article). He was fatally wounded by National Army soldiers in July 1922. During his funeral, Alice carried Brugha’s son, Rory, who was then a young child:

We both went to Cathal Brugha's funeral. A.G. was very proud to be carrying little Rory [Ruairí – later a Member of the European Parliament]. L.G. said that the funeral was the funeral of the Republic. At a meeting of Republican deputies and ex-deputies a letter was read from de Valera suggesting that Seán T. O'Kelly, Mrs. [Kate] O’Callaghan and L.G. should attend the meeting of the Southern Dáil. The inscription on the wreath we ordered for Cathal Brugha: ‘For how can man die better than facing fearful odds? With more respect and sympathy than words can express.’

Ginnell attended subsequent sittings of the Dáil but, in September 1922, he was forcibly removed from the parliament after repeatedly questioning its constitutional status. Alice Ginnell recorded what must have been a bitter moment:

Meeting of the ‘Treaty’ Dáil. L.G. was the only Republican who attended. Having asked if the assembly was a meeting of Dáil Éireann or of a Partition Parliament, he was forcibly ejected - Seán MacEoin being the only free Stater to get up and shake hands with him before he was put out.

By September 1922, the Ginnells appear to have been experiencing financial difficulties and they discussed the possibility that Alice would return to the USA:

A.G. went to see L.G. with regard to her idea that she should go to the U.S.A. to try to start a typewriting office to provide their future means of Living, to which he agreed. He said that when it was first mentioned in Argentina he could not conceive it at all, but, now he is reconciled to it. There really seemed nothing else to be done.

On 4 October, Alice Ginnell applied for a passport to the USA as ‘Miss King, born in Mullingar’. She also described herself as single and stated her aim was to work as a ‘foreign typist’. A few weeks later, when she was almost ready to depart, Alice was visited by old friends:

Mrs. [Margaret] Pearse called to say good-bye to A.G. and said that if ever A.G. was short of money to let her know and she would send some if she had it. L. de Lacy [perhaps Lawrence de Lacy] also called and brought her cards printed ‘A. King’ in a very nice pocket book and a bottle of champagne which they drank the last thing.

Alice Ginnell would be accompanied to the USA by ‘Miss Myles’ who worked in the Underwood Typewriting Office in Dublin. According to Alice, Myles ‘was delighted at the prospect of coming away with her to help her’. On 25 October, as Alice noted in her diary, ‘Miss Myles and A.G. left on their adventure’.

In early December, Alice Ginnell established a ‘Public Stenographer’ office on Madison Avenue, New York. Laurence followed her to the United States later that month and became the anti-Treaty representative in Washington. They were increasingly isolated figures, however, even among anti-Treaty republicans. On 27 December, Alice wrote:

There is friction everywhere. All the Irish people in New York – Sceilg [J.J. O’Kelly, former editor of the Catholic Bulletin], Jos. O’Doherty [part of an anti-Treaty delegation to the USA, along with Sceilg], Moylan [Sean Moylan, who was on a mission to raise funds and purchase weapons for the anti-Treaty IRA], Mrs. Skeffington [Hanna Sheehy-Skeffington, who was then raising funds for the families of imprisoned members of the anti-Treaty IRA] - seem to resent L.G. with the exception of Mrs. MacSwiney [Muriel MacSwiney, who was then on a speaking tour of the USA] and Robert Briscoe [who was raising funds for the anti-Treaty IRA]. Then there is friction between various Irish-Americans and Irish-American Associations - to simplify it, perhaps too much - it may be said between the Clan na Gael and the American Association for the Recognition of the Irish Republic - between the other ladies and Mrs. MacSwiney - that is on the anti-Treaty side - to say nothing of the division between the Free Staters and the Republicans!

Although Laurence Ginnell remained relentlessly active his health was fading. By early 1923, he was spending much of his time in Washington while Alice worked in New York. The couple were apart on 17 April 1923 when Alice heard the news:

Mr. MacGarrity [Joseph McGarrity, leader of Clan na Gael and, by this stage, an opponent of the Treaty] rang up Mrs. G. … to ask when she had heard from L.G. and to say that he was not at all well. She said ‘There must be great rejoicing over that - at which Mr. MacGarritty was shocked. She then said to him: ‘Mr. MacGarritty, you are far too intelligent a man not to know what has been going on.’ She also said that she intended to go down to Washington on the following Saturday. Then Mrs. Skeffington rang up and asked Mrs. G. to come over to see her as soon as possible - that the matter was urgent. A.G. wondered what was up, that they had telephoned her after such a long silence. She went to see Mrs. Skeffington, who tried to break the news gently that L.G. was dead. R.I.P.

Alice described the circumstances of her husband’s death:

L.G. called to see his doctor that morning and - to save Irish Republican money - walked from the doctor's house back to his hotel. He died almost immediately he got back.

The grieving Alice Ginnell brought her husband’s body back to Ireland for burial, a journey that was complicated by problems in arranging the necessary paperwork. She travelled by ship to Southampton and then by train to London, after which she recorded a short entry to her diary:

It was on the 1st May that his body arrived in Dublin. It was brought to Whitefriars St. and after Mass next day by motor to Clonarney, Delvin, where, in a grave lined with moss and primroses, he was laid to rest among his fathers.

Shortly after Laurence’s death, Alice returned to live and work in Ireland. She took a position as a translator in the Department of Industry and Commerce and spent the last twenty years of her life living at 24 Clyde Road, Ballsbridge. She was granted a military service pension in 1956 for her membership of Cumann na mBan and for her work in the USA and Argentina. Alice Ginnell died, aged 86, on 2 August 1967 at Our Lady’s Nursing Home, Edgeworthstown.