The Old Rail Trail is a rural route through the heart of the Irish Midlands, starting in the bustling town of Athlone and continuing on a converted stretch of the Midlands Great Western Railway. The 40km journey takes us through rich fertile farmland, away from the hustle of towns, in a beautiful rural setting to the market town of Mullingar.
The Old Rail Trail forms part of the proposed Galway to Dublin Cycleway, which will be Irelands first dedicated inter-city coast to coast greenway route for cyclists.
On the 18th October 2015 the Old Rail Trail was officially opened by An Taoiseach, Enda Kenny TD. 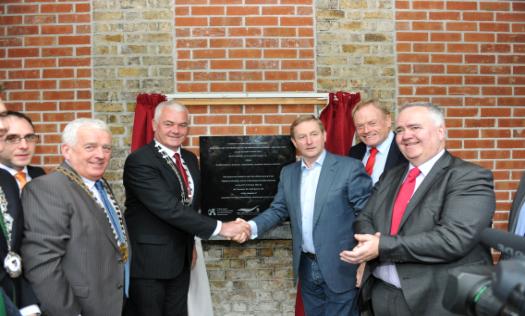 The Old Rail Trail currently starts at Garrycastle on the eastern edge of Athlone, a designated historic town and more commonly known as the Capital of the Lakelands. Athlone is a thriving business and shopping town centrally located in the midlands of Ireland on the banks of the River Shannon. It is a busy and prosperous town with an abundance of interesting tourist attractions and excellent restaurants, each with its own distinctive character, catering for all the family. Dominating the town is Athlone Castle Visitor Centre - a Norman castle with panoramic views of the Shannon. Athlone is also home of the Luan Gallery, a contemporary art gallery and the first purpose-built municipal art gallery located in the midlands of Ireland.

Moate is a thriving town providing restaurants, refreshments and accommodation. There is also direct access to Dún na Sí Amenity & Heritage Park, This is a Community Park for all, encompassing ecology, play, heritage, arts and education. The park consists of a café, a series of paths, children's playground, a wetland reserve and planted parkland which includes native species and bird hides.

The main station building is in private ownership. The village of Castletown Geoghegan(3km) can be accessed by public road, providing access to camping and refreshments.

Mullingar is the end of the Old Rail Trail, a lovely old market town, take a stroll to see the Joe Dolan statue one of the towns famous singers which stands outside the historic Market House which houses the local Tourist Office, visit the beautiful Renaissance style Cathedral with its fantastic mosaics or meander peacefully on a looped walk by the Royal Canal. Belvedere House Gardens & Park over looking Lough Ennell with its enchanting Tale of the Jealous Wall, 160 acres of parkland and fantastic calendar of events is situated just 8 km from the town of Mullingar.

The Midland Great Western Railway (MGWR) was the third largest railway company in Ireland. The MGWR lines linked Dublin to both Galway and Sligo and in doing so brought an extensive railway network to Westmeath. The two largest centres of population along the route of the railway were: Mullingar and Athlone, both in Westmeath. The railway track was originally constructed as a dual track which was later reduced to a single in 1928.

The railway line reached Mullingar from Dublin in September 1848 by which time the new station had been built. The first train arrived in Mullingar on Monday, October 2nd 1848. By 1857 the station had been upgraded by the provision of additional station buildings.

Opened in 1851, this station catered for both passenger and goods transport. The first station-master who was appointed in 1851 was paid £40.00 p.a. The station closed in 1963.

The station at Moate opened in 1851. The station-house is a modest single storey structure and as well as passenger services the station had both goods and cattle sidings. The Station closed in 1987.

The race to cross the Shannon at Athlone was a hotly contested one. The Great Southern Railway coming from Tullamore, had high hopes of being the first company to cross the river but the MGWR emerged victorious.

This railway line from Mullingar to Athlone was closed by Córas Iompair Éireann (CIE) in 1987 when the last remaining services were routed through Tullamore.